Shen Yun: ‘I had the impression of being in a dream!’ 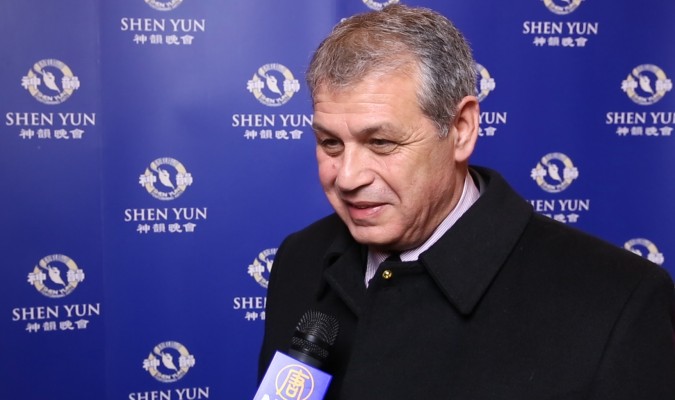 Philippe Garcia, district president of Bouches-du-Rhône’s National Order of Merit, felt like seeing Shen Yun was like being in a fairy tale. (Courtesy of NTD Television)

AIX-EN-PROVENCE, France—Shen Yun Performing Arts’s first appearance in the south of France was one of magic and happiness, according to the theatergoers at the Grand Theatre de Provence on March 9. The New York-based company had performed to a warmly welcoming full house.

“It was a wonderful and magical show. I had the impression of being in a dream, in a living fairy tales. Everything was really a dream!” says Philippe Garcia, district president of Bouches-du-Rhône’s National Order of Merit.

Garcia found the synchronicity of the animated backdrop with the music and the movements of the dancers on stage just remarkable. “It was really to-the-millisecond precision, both to the [backdrop] and the orchestra, it really was truly magical!”

Mr. Garcia discovered an unknown China. He said it was “a much wiser world, with real spirituality, with happiness—happiness especially!”

The theatergoers discovered various aspects of spirituality in Shen Yun. While the culture and beliefs are vast, the meaning seemed to be universal.

“There are so many extraordinary religions and belief in God in China!” said Françoise Naud, astrologer and writer, who admits she wept thinking of the performance’s message and the numerous moral values.

“There is a fine message presented with great respect and great authenticity,” she said. “It gives a sensation of a battle between good and evil”.

Shen Yun’s dancers have repeatedly stated that it is important, in their discipline, to pay attention to inner meaning and morality. For example “yun,” from the company’s name, is a term in classical Chinese dance which usually means bearing or inner spirit, describes an innate character, different for each dancer and each dance.

Nadine Léon, a receptionist, had learned ballet in her youth. To her, the dancers embodied a genuine spirituality. “We feel that they are supported by something, there is a glow on their face, you really feel this is not fake, they are there, they dance but they have this strength in them, this is not ‘playing a role.’ No, I think it goes much further,” she said.

“We felt great humility throughout the entire choreography and a beautiful harmony of colors … and the dancers were really light and fantastic,” said Philippe Garcia.

Though interviewed separately, Ms. Léon and Mr. Garcia both spoke of the same feeling of elegance.

“The characters are so graceful, it has nothing to do with what we are used to in the traditional European classical style,” Ms. Léon said.

The district president of the National Order of Merit enjoyed the differences between the cultures as well: “This is quite different from the folklore in our area! But really, there is much more gracefulness in what is presented in the Chinese culture.”