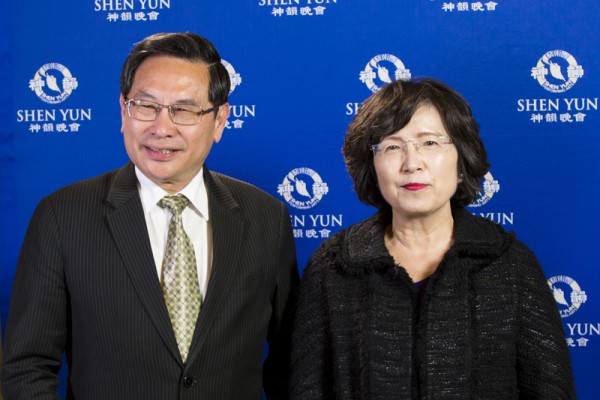 CHIAYI, Taiwan—Shen Yun Performing Arts was enthusiastically embraced by the mayor of Chiayi City and the citizens in southern Taiwan. The tickets for the three performances were sold out weeks ago.

Having seen Shen Yun performances many times, Mr. Twu wholeheartedly welcomed the company. “We very, very much welcome such a world class performance,” he said. He emphasized the word “very” by repeating it, believing the show presented an artistic feast, as well as carried valuable messages.

“Shen Yun’s performance does not only represent the beauty of the Chinese dance, but connotes upright messages, such as justice,” Mr. Twu said with admiration. He’d seen Shen Yun’s first performance this year at Chiayi Performing Arts Center on March 28, 2016.

Shen Yun can heal our mind and body. And the healthiness achieved makes an ideal body, soul, and society.
— Twu Shiing-jer, mayor of Chiayi City

“It helps develop an ideal personality,” he explained. Watching “Shen Yun can heal our mind and body. And the healthiness achieved makes an ideal body, soul, and society.”

Having once been the Minister of Department of Health in Taiwan, Mr. Twu is concerned about the health of both the individual and the society. He thinks that one of the most important messages Shen Yun conveys is “the message of Falun Gong’s against its persecution, in which we see hope, especially help from the divine.”

He was impressed by the program “Trial by Fire,” depicting a story from contemporary China. “Falun Gong (Falun Dafa) practitioners just want to cultivate and obtain a healthy mind and body but end up being persecuted [in China], and the persecution is extremely brutal.”

“People will be awakened,” he said. “Shen Yun gives the Taiwanese people and even the Chinese people a message that evil will be defeated by righteousness. Justice will eventually prevail.”

Chen Dinghong had heard of Shen Yun’s reputation for a long time and finally made it to see the performance. “I was really touched. It felt so divine!” said Mr. Chen, a high school principal, after seeing the show.

He said, in seeing Shen Yun’s performance, “one might be inspired in different ways, but we’ve all learned that it demonstrates and passes down authentic Chinese culture and shows us the meaning behind it.”

“The cultural heritage displayed in the performance includes the ethics and morality” of the ancient Chinese people, he said.

“One of them is ethics,” he said with a sigh. “The ethics in traditional culture is hardly seen now.”

He says what has been lost in the society is shown in the performance.

He explained it with the mini-drama dance, “Defending the Throne“: “I was deeply impressed by the program because while the notion of loyalty, justice, and righteousness is ambiguous today, the piece shows us that justice of the gods always exists.”

He praised Shen Yun’s ingenuity to manifest serious themes like ethical values in an entertaining way. The audience does not feel preached to, but instead moved. “Moreover, it produces a touching piece,” he added. “It depicts the story of Falun Dafa practitioners’ standing up to the persecution peacefully. It gives people hope that gods still care about the human world.”