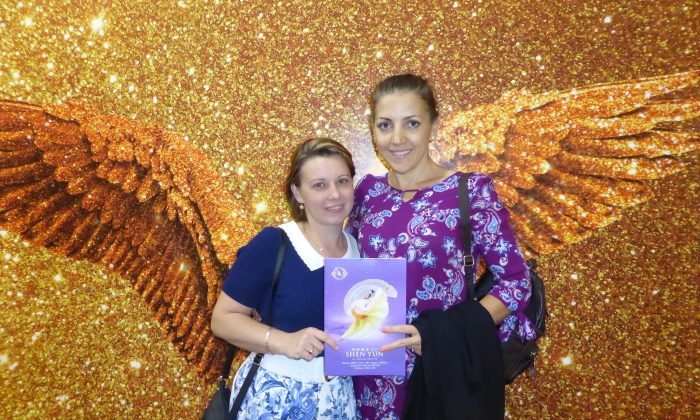 Shen Yun’s showcasing of 5,000 years of China’s divine culture has made quite an impression on lifestyle studio owner Magda Xantopol, who felt inspired to ponder on the meaning of life.

“I believe we can have a connection, we usually have a connection with nature, which can be our creator, and the universe as well because this is what we are,” she said. “They have great power as well, we can be good people, we can help each other, we can be really great as nation and that needs constant continuous work for that and service to others, helping each other and a lot of work and discipline.”

Having experience in a variety of modern and classical dances, Xantopol appreciated the artistic merit of Shen Yun’s classical Chinese dance.

“I liked all the new elements that were introduced and I liked the costumes, and I like when it’s all organized, and timing is very well,” she said. “They have to be really well prepared; a lot of training, a lot of repetition, rehearsals, and that’s why I appreciate when a show is athletic and looks that great.”

Her favorite performance was the “Mongolian Spirit,” which depicted Mongolian horsemen cheerfully celebrating their lifestyle closely linked to nature.

“The background was beautiful, all the backgrounds with each different scene, different dance,” Xantopol said. “I guess it’s from real places in China—that was really beautiful.”

“I appreciate more real life stories rather than science fiction, rather than fictional stories,” Xantopol said. “Even though they are not always happy it’s what I would like to see in a show, so this is why I appreciated this show.”

While watching Shen Yun, she interpreted the performances to be sending a message about individual freedoms.

“We want to be free, we want to use our own minds to make our own decisions,” Xantopol said. “This comes with responsibility as well and it comes also with freedom; but it’s not only doing what you want, it’s also considering [and] being responsible for what you are doing.”

“I thought it was fabulous, actually. The orchestra portrayed the eastern style of dance very well,” she said. “The music really helped with the portrayal of the dances, I thought it backed it up very well.”

Rigby also enjoyed the classical Chinese dance and journey they took the audience on.

“All the dances are superb … the dances themselves of course are just exquisite so now I’m having a great night,” she said. “[The emotion] really told the story … the storytelling was excellent.”

She is absolutely convinced that Shen Yun is a world-class performance that everyone should see.

“It was a must-see because it really shows the ancient Chinese storytelling through [dance],” Rigby said.

“They were very moving performances, they were quite spectacular, quite nice, lovely,” she said. “Very high energy, constantly moving, high octane, lots of power, lots of dance, very entertaining.”

She was dazzled by an impressive array of color, dance, and movement.

“Seeing all the performances be so well choreographed, with everything being so precise, with all the dance being on point, [was] really good,” Lopes said. “I could see that they were very inspired by the heavens and by the divinity and by God and get all their power from God, I could see that with the video imagery as well.”

“I felt really emotional during one of the stories, and I just felt really excited to watch it all—really spectacular,” she said.

“I think the perfection of the dance, they were just so perfectly in sync with each other and the color, just amazing color. The really bright ones really grabbed me, yes—really stunning.”

Nora Porter who works in accounting had positive feelings after watching Shen Yun.

“There were lots of wow moments that just came out,” she said. “I really enjoyed the ‘Sleeves of the Tang Palace’ dance, it was really so beautiful.”

She also liked the performance’s witty humor and was shocked to hear about the Chinese regime’s barbaric treatment of Falun Dafa (also known as Falun Gong) adherents.

“I’m glad that they used comedy as well as romance and adventure,” Porter said. “I was a bit taken aback by a couple of the other more modern performances about what’s happening in China … in this day and age, how can a country that’s supposed to be number-one still be living in that sort of barbaric age?”

She also loved the soprano, Min Jiang, who sang “To Keep Heaven Possible.”

“When I read the message, I thought it was beautiful,” Porter said.  She was also moved by the finale. “I loved the sentiment in the end where he said that their belief is that we were all sent from heaven and there is hope to return.”

With reporting by Mary Yuan and Richard Szabo.