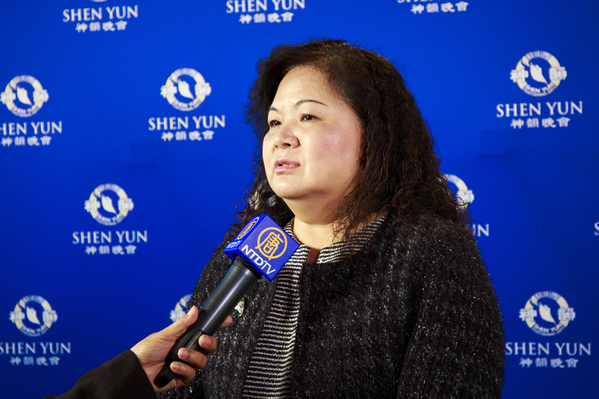 Yang Chen-Chi, president of Association of Small and Middle Enterprise, choose to go to Shen Yun’s performance so she can have one day out of a year just for herself. (Cheng Shun-li/Epoch Times)

KAOHSIUNG, Taiwan—”I need one day out of a year just for myself and Shen Yun is the gift I want that day,” said Yang Chen-Chi, who drove three hours to see the performance on March 26.

With her busy schedule as the president of Association of Small and Middle Enterprise in Taitung, Yang needed to settle her overactive mind. “I like to watch the dances because they take my mind off of the things I have to deal with. This way I get to communicate with my inner self,” she said.

Yang explained the importance of self-communicating and the reason she comes to Shen Yun’s performance every year for the past four years. “We are all very busy everyday, and then we become lost in a demanding lifestyle. In this secular world we take care of almost everything but ourselves because we lack time.”

[Shen Yun] is a gift for myself. The positive energy I feel from the stories it tells allows me to reflect on the things I do and helps me to sort them out.”

“I feel sorry for those who won’t take the time to come and enjoy the five-thousand years of spectacular Chinese culture. [Shen Yun] is definitely worth it,” Yang said.

Shen Yun’s mission, according to its website, is to revive the 5,000 years of Chinese culture through the universal language of music and dance.

It wasn’t just the dances that alleviates Yang’s stress, for her the music also has therapeutic power. “A friend once told me that art possesses healing power. Indeed, the harmonic soothing sound from the Shen Yun Orchestra comforts me,” she said.

Shen Yun Performing Arts Orchestra has the unique ability to seamlessly blend the disparate sounds of East and West and create one fresh, harmonious sound.

After enjoying the stories from various Chinese dynasties and ethnic dances, Yang couldn’t help but worry about the lost glorious traditions. “People used to wear traditional costumes to celebrate important occasions and festivals. They don’t seem to do that anymore,” Yang said, disappointed.

“Before we know it, our traditional costumes, just like the traditional architecture, will be gone. After modernization washes away our traditions, what will we be left with?” she said.

She was pleased to learn that with Shen Yun’s performances gaining popularity each year in over 100 cities worldwide, more people are becoming aware of and inspired by the authentic Chinese culture, including the costumes, presented in the shows.

She then explained why she hoped that the almost lost glorious culture can be revived. “If different groups in Taiwan could identify themselves as having the same [Chinese] cultural descent and be proud of it, they are less likely to become divisive and the society will be more stable.”

Shen Yun’s costume designers collect countless designs of traditional attire, ranging from those of emperors, ministers, and generals to the everyday clothing of the common people. They use bright colors to tailor and recreate hundreds of new pieces each season. Every detail is given meticulous attention and is a result of artistic inspiration and careful polishing. The designers stress harmonic balance and contrast. Their objective is an authentic presentation of the attire that comes from China’s divinely inspired traditional culture, and a consummate stage effect.