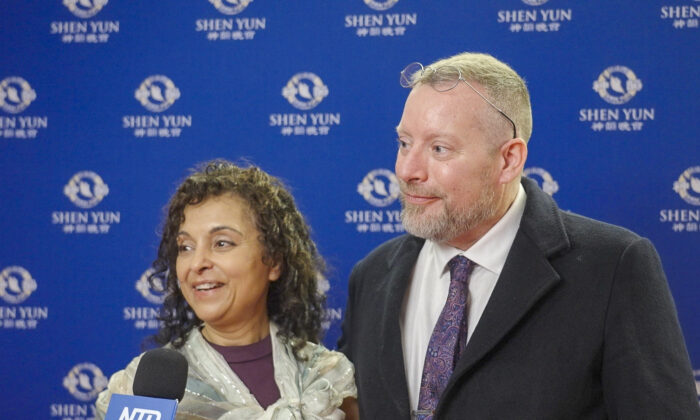 Doreen Francis and Joseph Malcolm at the Shen Yun Performing Arts performance at the Théâtre Maisonneuve, in Montreal, on April 16, 2022. (NTD)

MONTREAL—Dr. Doreen Francis, a psychologist and adjunct faculty member at the University of Toronto, says that if she could, she would see Shen Yun every day.

Based in New York, Shen Yun is a classical Chinese dance and music company that aims to revive the traditional culture of China.

Dr. Francis noted the expressiveness in Shen Yun’s dances, each of which features a different storyline, and said the performance embraces “the beauty of the world.”

“I just love the precision. I love the beauty of each and every dancer,” she said.

“Their smile—it’s so bright, you know they love what they’re doing,” she said.

With everything that’s going on in the world, Shen Yun helps the audience feel happy and uplifted, Dr. Francis added.

It reminds you that the world is full of beauty, regardless of how much ugliness there is.
— Dr. Doreen Francis

“It reminds you that the world is full of beauty, regardless of how much ugliness there is. … We truly feel blessed, it’s just amazing,” she said. “I just feel happy—happy and full of love and joy.”

Joseph Malcolm, a paramedic, said it was his first time seeing Shen Yun and he was amazed.

“It’s spectacular. … It warms your heart, and it lifts up your spirit,” he said.

“These days, and in this day and age, we need to have things that … give us something to [be inspired by]. It’s just an amazing performance.”

‘Something Special That Touched My Heart’

Karen Bray, owner of a cosmetic manufacturing company, said that Shen Yun is something special.

“My girlfriend was crying throughout the show. It was something very, very nice,” she said. “The colors, watching [the artists] dance, and enjoying their history, it was just something special that touched my heart. ”

Ms. Bray praised the storylines featured in the dances, which included a range of topics from different periods in China’s history and various themes from its culture—from ancient legends to heavenly scenes to the realities and suppression in modern China under the communist regime.

“Some very enlightening, very uplifting stories were told,” she said.

Ms. Bray added that she particularly enjoyed seeing the scenes that featured a Buddha.

“That’s always been a special part for me,” she said. “Buddha is .. watching you.”

“I think the history of China … is something that everybody should reflect on,” she said.