Shen Yun Has the Power to Change China, Theatergoer Says 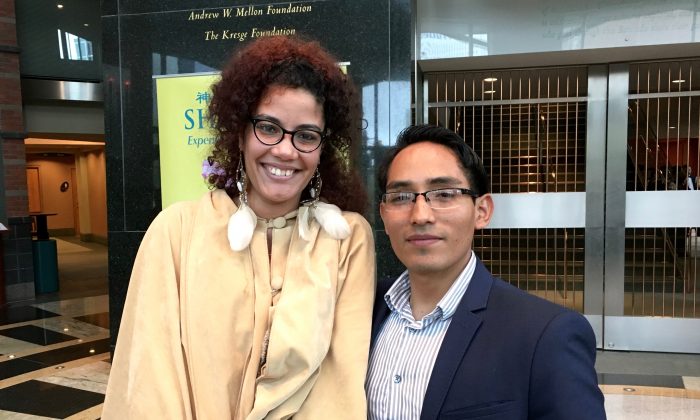 NEWARK, N.J.—Art is something that can change lives, touch hearts, and spark both reflection and action, when one relates to it. Nicole Contreras, who saw Shen Yun Performing Arts for her birthday, thought it had the power to change China.

“It touched your heart in a very sacred and very divine way,” said Ms. Contreras after seeing the performance May 1 at the NJPAC with her husband Mario Esteban. The couple was moved by what they described as an enlightening experience.

“I think it also brought out the true purpose of life, and how everything in the world is actually conspiring so you can have the wrong set of values, and that will mess up your life,” she said.

She also thought Shen Yun stressed a positive message that following the correct way will bring love and happiness into your life.

The performance itself consists of about 20 vignettes of classical Chinese dance, folk and ethnic dance, and bel canto soloists, who aim to present the authentic traditional Chinese culture. In this last decade, these artists have grown to four equal-sized companies that tour the world simultaneously, and have gained critical acclaim for their unique mission and presentation.

The culture is one that is said to be divinely inspired, and thus Buddhas and Taos show up in the stories, and themes of heaven and scenes of celestial palaces make appearances every performance. Audience members often share their spiritual ponderings and self revelations after each performance.

For Ms. Contreras, the scenes of figures coming from heaven, from the sky, certainly sparked this reflection. She felt she was given this to understand that there are sets of virtues and values that are given to us, and they are very important—“like tolerance, like compassion … consideration for one another.”

The presentation had been elegant and beautiful, not brutal or suggestive, as you might often find in artistic presentations, she said. It was, in effect, very touching.

I thought it was a piece of art that demonstrated love, compassion, and beauty.
— Nicole Contreras

“I thought it was a piece of art that demonstrated love, compassion, and beauty,” she said. “I felt divine, and I felt a sense of respect, and a very beautiful coordination.”

She thanked the artists again and again for presenting this message, for her, and for the world to hear.

“I was almost crying in each one of the scenarios where they were representing the battle between the good and the bad, and how heaven is here now, and it’s just waiting for us to just to do what our heart says,” she said.

With only days left in Shen Yun’s global tour, she said she wanted to urge others to not waste any more time and come to see Shen Yun.

Mr. Estaban said he has family in Kansas, where Shen Yun is appearing next, who he will recommend to see the performance. He, too, felt it was phenomenal, and was glad they had finally taken the opportunity to see a performance.

Ms. Contreras said the message was a simple one of “tolerance, care, and love,” as respect for others, but also not forgetting the value of things that have been passed down for “5,000 years on this earth.”

There are values today we do not place enough importance on, she said, and distractions that we give too much value to. This was a reminder that “there is a lot of light and a lot of beautiful things happening in this moment and we just have to be aware and trust our hearts.”

She saw meditators in the performance as well, and thought they were aptly represented with a flower. Meditation is one of those things that will help you take time and listen to your heart, she added. “I think we have to let that flower in our hearts just to expand, and to trust a little bit more in ourselves.”

For anyone that sees Shen Yun, it is a life changing experience, she said. It is a shame that Shen Yun is banned in China, she added, as what it shows is the true culture.

Over the years, the Chinese Communist regime, in fact, has sent letters to other countries in an attempt to stop performances, without avail. The company recently toured in South Korea despite these letters.

Ms. Contreras felt confident it would change the hearts of Chinese people if only they could see it.

“The message is so strong and powerful that it will just destroy the whole system,” she said.

“It will change your life if you see it, so I advise everyone to just see it. Give yourself a chance,” she said.

“It is the most beautiful thing you are going to see.”