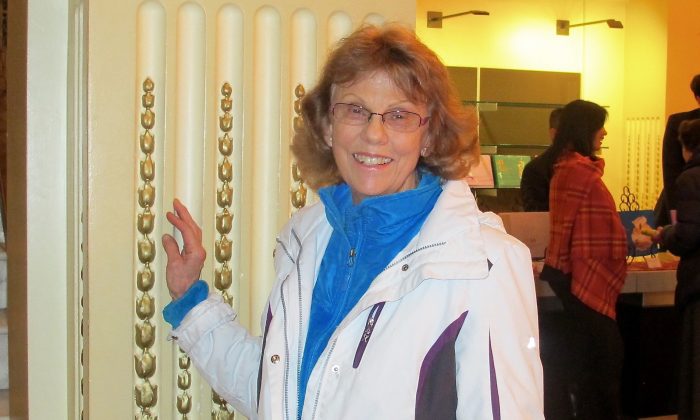 Ms. Briscoe-Michas was a dancer and actor in her earlier years, dancing in Las Vegas, but now concentrates on writing and photography, although she is still involved in local theater and has a costume collection at home.

When a friend came to visit with Shen Yun tickets in hand, saying, “You have to see this,” she did not realize that she was about to take an amazing journey.

Shen Yun, based in New York, is the world’s premier classical Chinese dance and music company.

“Chinese dance is at the heart of what Shen Yun does,” according to the website. “Known for its incredible flips and spins, and its gentle elegance, it is one of the most rigorous and expressive art forms in the world.”

Ms. Briscoe-Michas particularly appreciated the ability of the dancers. “I’m just amazed at those dancers, I really am,” she said. “The incredible strength of the training and the synchronization and just the teamwork. It was flawless.”

“I know how much hard work it takes to do that much precision, and that’s why I enjoyed this. The precision and the strength and the professionalism. It was just incredible.”

Shen Yun has classical Chinese dance at its heart, but incorporates a blended orchestra of classical Western instruments with traditional Chinese instruments. A state-of-the-art digital backdrop transports the audience to the heavens and through thousands of years of Chinese history to give a complete theatrical experience.

And through the universal language of music and dance, “Shen Yun weaves a wondrous tapestry of heavenly realms, ancient legends, and modern heroic tales, taking you on a journey through 5,000 years of Chinese culture,” according to the website. “Its stunning beauty and tremendous energy leave audiences uplifted and inspired.”

Ms. Briscoe-Michas said she was very impressed by the whole performance.

“I know I say that word over and over again, but it was an awesome show, and I look forward to perhaps seeing them again sometime.”

Carolyn Goodman, a teaching technician, was at the same performance. She thought Shen Yun was fabulous.

I loved the elements of truthfulness and compassion and tolerance.
— Carolyn Goodman

“I loved the whole spiritual aspect and the way it brought everything all together. I loved the elements of truthfulness and compassion and tolerance. I think that says it all. If we could all do that,” she said.

Shen Yun is so much more than just a music and dance performance; the mini dramas bring a glimpse of the essence of Chinese culture to the stage and the virtues to inspire us all.

The website states, “One discovers a sea of traditional Chinese culture. Mortals and divine beings merge on stage as one. Principles such as benevolence and justice, propriety and wisdom, respect for the heavens, and divine retribution, all come to life, washing over the audience.”

Ms. Goodman was in awe of what she experienced. “I love the symbolism and the truth in every song. It was absolutely beautiful, very amazing. Magical, truthful, wonderful, connecting!

“Every song, every dance had an aspect that drew me in and made me feel connected to the universe, to everyone in the theater, to everyone that was dancing, it was really wonderful. It’s profound. It was a great experience. I would recommend it to anyone.”