Shen Yun Greeted With a Warm Embrace in Philadelphia 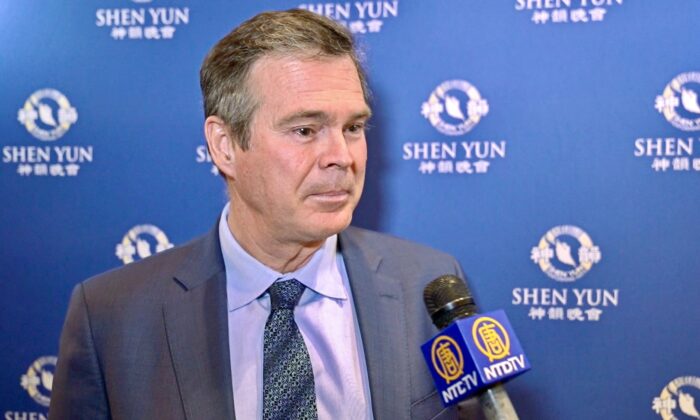 James Sibel, a physician, attended Shen Yun Performing Arts with his wife in Philadelphia, Pennsylvania, at the Merriam Theater, on Feb. 12, 2020. (NTD Television)

PHILADELPHIA—The City of Brotherly Love welcomed Shen Yun Performing Arts to the Merriam Theater near its historic downtown on Feb. 12, 2020, as an important stop on this year’s world tour. The classical Chinese dance company enjoyed its opening night blocks away from the Liberty Bell and Independence Hall, both of which played a part when the United States broke from a repressive foreign power hundreds of years ago. Fitting, since audience members find Shen Yun’s is a modern story of freedom and the American dream.

Many of Philadelphia’s seasoned theatergoers attended the performance, including James Sibel, the CFO of a consulting firm. He said the performance by New York-based Shen Yun was different than he expected it to be and that it was fantastic.

“[Shen Yun is] magnificent so far, it was wonderful. I’m here with my wife and we’re both delighted,” he said during intermission. “I was surprised by all of it, actually. It was wonderful.”

Shen Yun’s mission is to revive China’s 5,000 years of civilization and share it with the world. It aims to do this by utilizing ancient Chinese art forms on the stage such as classical Chinese dance, bel canto singing, and music from instruments that are unique to the nation which capture it’s soulfulness and rich complexity—the erhu, pipa, and dizi, for example.

But a true revival of China’s culture would not be complete if it did not bring with it the spiritual essence of the country once known as “The Divine Land.” Shen Yun carries on ancient China’s reverence for the Creator and heaven by incorporating celestial realms and spiritual themes into its stories and song lyrics.

Sibel felt fortunate to be a part of that.

“It’s fantastic to see a revival of something that is so ancient and dear to the hearts of so many. I’m privileged to see it,” he said.

“I think most ancient values can benefit our modern society,” he continued, in reference to Shen Yun’s revival of ancient China’s values such as kindness, loyalty, perseverance, and more.

“We all need some of that respect that has been lost for one another,” Sibel said, adding that the spirituality in the performance meant a great deal to him and that he felt honored to have seen Shen Yun.

Matthew Bashi is the Associate Director for Global Client Relations at Educational Testing Services, the organization that oversees such programs as Teaching English as a Foreign Language certifications (TOEFL). To him, Shen Yun was “just beautiful” and he now understands why the company travels to perform again year after year.

What did he like about the performance? “Everything,” he said, “the historical aspect of it, and then the scenery, the magnificent colors and the way everything is so seamless in terms of the dances. It is absolutely magnificent.”

“I didn’t know a lot about the Chinese culture and religion, and I’ve learned a lot tonight, and I appreciate that, and I look forward to learning more tonight as the show progresses,” he said.

A certain dance piece by the female cast stood out to Bashi among Shen Yun’s short vignettes, a dance titled “Lantern Grace.” In it, “court ladies bearing exquisite bronze lanterns glide to and fro” according to the program book.

“It was just beautiful,” Bashi said.

He could see the expressions on the dancers’ faces throughout the performance, complimented them, and commented on the show’s overall effect.

“I’m going to highly recommend [Shen Yun] to my peers and my coworkers, of course,” Bashi added.

“I would highly recommend coming to see it,” Gerber said, who attended with his wife, Debbie, a nurse.

“I would tell them to come see it also. Very enjoyable,” she said.

“[Shen Yun] is wonderful,” Elliot said. “I was a little surprised. I thought that it was sort of a cultural envoy from China, and I was surprised to find out that it was quite the opposite. They are expressing unhappiness about the way the people are being treated in China and this is not available to be seen in China.”

Shen Yun cannot perform in China today because the Chinese Communist Party has spent decades trying to wipe out China’s traditional culture, especially it’s rich spiritual history and its authentic spiritual practices. That’s why this classical Chinese dance company whose members practice Falun Dafa, an ancient spiritual discipline, cannot step foot in China’s borders. The persecution against Falun Dafa practitioners is severe and ongoing. A Shen Yun performance includes scenes of this persecution in modern-day China and hopeful narratives about the way spiritual believers like Falun Dafa adherents are overcoming it with compassion and faith.

Elliot and Debbie both felt uplifting and positive energy from Shen Yun’s performance.

“I love the colors, the colors and the movements. It’s very relaxing but it’s also very energetic so I like it a lot,” Debbie said.

“I think [the singing] was amazing, very powerful,” Elliot said, and Debbie agreed.

Elliot said he was surprised by the lyrics sung by Shen Yun’s bel canto vocal soloists, “but I thought the thoughts were very beautiful,” he said. Shen Yun’s soloists often sing about the Creator one day returning to earth for all mankind, an ancient legend passed on through Chinese history since time immemorial.