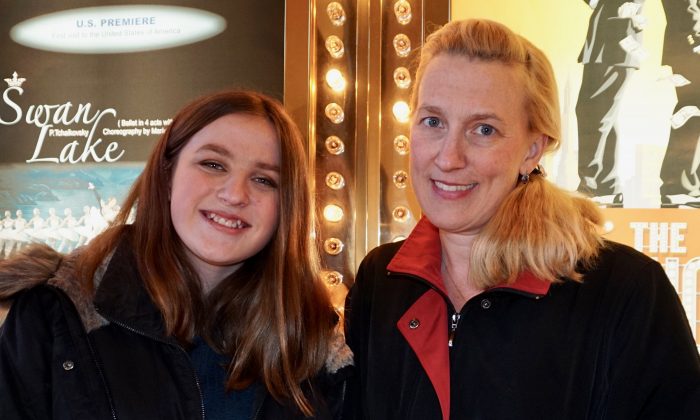 AURORA, Ill.—Young dancer Olivia Johnson and her mother Kimberly both identified with the gracefulness the dancers of Shen Yun Performing Arts Global Company exhibited during their final performance in Aurora this season.

Olivia Johnson is a dancer with experience in ballet, jazz, and modern forms. She and her mother Kimberly Johnson attended Shen Yun’s matinee performance at the Paramount Theatre on Jan. 13. Her mother is a former gymnast.

“I thought it was really good. It was nice to see a different interpretation of dance because I am a dancer and I have never seen Chinese dancing before,” Miss Johnson said.

Miss Johnson said that for her, what set classical Chinese dancing apart from what she’s familiar with was mostly how the choreography synched with the music.

“The music was different and the way they moved with their costumes—they moved differently,” she said. In many of the dances, the flowing skirts or extended “water sleeves” of their costumes were used like props. In other dances, props ranged from handkerchiefs spun in show stopping feats and even balancing porcelain vases atop the head.

The young dancer said she was familiar with leaps and tumbling and had seen a lot of it before, but with Shen Yun, she said, “It seemed a lot more graceful.”

As the emcees explained, sports like gymnastics actually originate from classical Chinese dance, which goes back thousands and thousands of years.

“It’s very graceful and the colors were great. It was very nice to see elegant dancing,” Mrs. Kimberly Johnson said of the performance.

Because of her experience with gymnastics and acrobatics, Mrs. Johnson was able to relate it to what she saw today personally.

“It was nice to have educational pieces along with the program so they taught you how the acrobats, like we would do the round off, triple flops and then we would do the back flips where that originated,” she said.  Mrs. Johnson said she hadn’t ever really thought about where these moves originated, but it made sense, seeing them in context on stage. “It’s been around a lot longer than here.”

“Very calming, very calming,” Mrs. Johnson said of the expressiveness of the dancers. She praised the synchronization and how the dancers complemented each other, rather than trying to stand out.

Some of the new insights Mrs. Johnson obtained while watching the performance were related to the overall cultural climate in China today.

Specifically, how Shen Yun serves as a beacon of light shining on many elements of China’s traditional culture in theaters all around the world. She learned that because of the communist regime’s suppression of its country’s ancient culture, Shen Yun cannot be shown in China.

One of the themes throughout the performance Mrs. Johnson found relevant to herself was  the idea of being appreciative of everyday life, and aware that the grass is not always greener on the other side of the fence.

“Even though it is very beautiful there [in China], we would not have been able to go there to see it. It felt like [Shen Yun] kind of came here … it came to us, so that was nice,” she said.