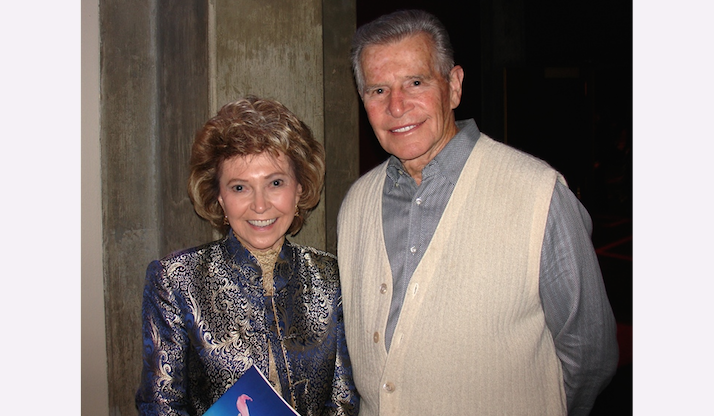 Shen Yun Gives You Culture You Don’t Get Otherwise

Ethan Jackson, former CEO of Basic American Financial, and his wife, Joyce, came out to see Shen Yun. This evening’s performance was Shen Yun’s first of four that the company will perform in “Indy” which then concludes its tour in the Midwest for the 2014 season.

There are mini-dramas in a Shen Yun Program that retell stories from China’s history, mythology, folklore, and literature. Bilingual English/Chinese emcees introduce each segment giving the audience some background knowledge.

“We’ve been to China and we’ve seen similar, but not the classical dancing. It’s quite good and I’m enjoying the explanation of what I am going to see,” Mrs. Jackson explained. “I loved it. It’s amazing.”

Mr. Jackson commented, “I just enjoyed all of the stories very much.”

“You’re getting a lot of the culture and the history of China that we don’t get otherwise,” his wife added.

“Classical Chinese dance has a history of thousands of years. Its dramatic jumping, spinning, and flipping techniques are just part of the vast repertoire of movements that make classical Chinese dance—one of the most demanding and expressive art forms in the world,” Shen Yun’s website states.

“The colorful garments, and the constant movement is outstanding,” said Mr. Jackson.

Mrs. Jackson commented, “The movement is beautiful and the costumes are quite modest which we like.”

Shen Yun’s orchestra is unique in that it features both traditional Chinese and classical Western instrumentation.

“The orchestra is incredible,” she said about the music. “The music is beautiful and the musicians are quite, obviously, quite good. I enjoy it”

Mrs. Jackson mentioned she would say to her friends: “Come see it, it’s worth it.”

Mr Jackson agreed and said they should “Tell them the emphasis is on art and movement as contrasted to so many of the dance entertainment where in the U.S. is more sexually-oriented, rather than beauty flow and movement.”

Shen Yun is something for the whole family. “Our grandkids would love it,” Mrs. Jackson said ultimately.