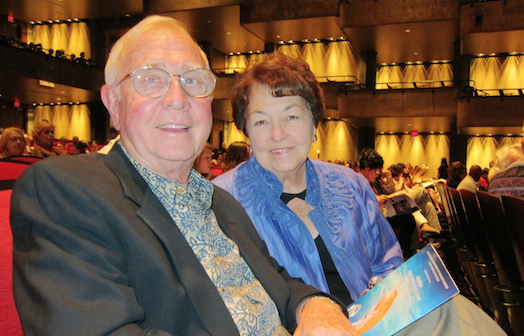 'I'm getting a sense of the history of the Chinese people'
BY Epoch Times Staff TIMEApril 21, 2014 PRINT

INDIANAPOLIS, Ind.—It was the first time Mr. and Mrs. Kemper saw Shen Yun Performing Arts perform. They enjoyed the performance of 5,000 years of divinely inspired civilization depicted through dance, music, and song. It was the last of four performances at Clowes Memorial Hall of Butler University, on April 20.

Mr. Kemper is one of the past owners of Calahan Enterprises, which later became a base for AgReliant Genetics, the third largest corn seed and research company in the United States. Mrs. Kemper was also previously in business. She and two other women owned five Hallmark Cards stores.

What Mrs. Kemper, particularly enjoyed about Shen Yun was the hundreds of colorful and unique handmade costumes and the live orchestra, which combines traditional Eastern and Western instruments.

Shen Yun’s mission is to restore traditional culture to its fullest extent, through story-telling dance of beloved legends, myths, and current and past history. This culture was almost completely lost due to the Cultural Revolution in China.

“I just feel like I’m getting a sense of the history of the Chinese people,” Mrs. Kemper said.

“I think it was a country steeped in culture, with music and dance and all of those things,” she said.

Mr. Kemper added, “Quite a contrast of what we see today in society.”

“So it’s interesting to see what past history shows and what today’s current history shows, and get some basis for that, and to better understand it,” his wife agreed.

“We’re not exposed to that very much here in this country, so I think this is a good thing for us to see,” Mrs. Kemper said.

The couple heard about Shen Yun while visiting in Florida this winter but didn’t get to go to the performance. “One of my friends was going to go, and I thought that it would be fun to see then. So, I’m glad we got to do it now.”