'The magic of coming here' 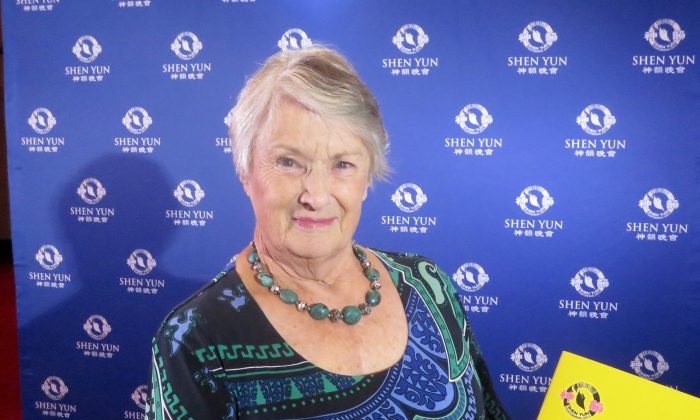 Ms. Caines, a retired nurse, describes herself nowadays as a gardener, a very good gardener she pointed out. With very little reason to live in her eyes as she lost her daughter and recently her husband, somehow she found the inspiration and courage to venture out on her own to see Shen Yun, though she did not know why. Even though she had purchased her ticket, there was still a moment she did not feel she could be bothered—but something inside her made to go.

“I am so happy. I am so thrilled that I didn’t back out. And you [Shen Yun] have made me feel strong and I will do it again,” she said. “I think it’s like the magic of coming here, I wasn’t expecting anything like this. … I think it’s just stunning.”

“I think people are divine,” Ms. Caines said. It reminded her of the good fortune she’s had in life—her education, the people she’s met. “Quite often I wonder, why me?”

She said she wanted to dance in the streets she was so happy after seeing Shen Yun, even though she has so many joint replacements she finds it difficult to walk very far and found steps a bit tricky. “I’m practically made of titanium; my surgeons call me their million dollar babe,” she said.

But now “I feel like dancing! I just could! It was so beautiful,” as she almost broke into dance on the spot and her eyes twinkled in delight.

She continued to describe the beauty she had experienced. “And the costumes, and the movements of those arms and legs. I loved the background and the way that it fitted in so that the divine seemed to end up on stage. And the timing of it, it was exquisite, it was sort of—you couldn’t help but feel it was divine.”

Ms. Caines said although she did not play a musical instrument herself she was brought up surrounded by music and came from a family of musicians, including a granddaughter who plays the flute very well and attended a master class in Vienna, and a cousin who disgraced the family by changing religion just so he could play a 900-year-old organ.

With a family so passionate about music she found Shen Yun’s orchestra amazing. She was delighted by the different sounds of the traditional Chinese instruments blended with the classical Western instruments.

“I think it was wonderful! Absolutely stunning! And the different sounds!” she said.

According to Shen Yun’s website: “The ability to seamlessly blend these two systems to create one fresh, harmonious sound is what makes the Shen Yun Performing Arts Orchestra unique.”

“A Western orchestra plays the foundation, while traditional Chinese instruments lead the melodies. The sound produced is uniquely pleasing to the ear. The ensemble at once expresses both the grandeur of a Western orchestra and the distinct sensibilities of China’s 5,000-year-old civilization.”

Based in New York, Shen Yun has classical Chinese dance at its heart, but also includes story dances portraying glimpses of China’s millennia of culture and history and solo singing and instrumental performances.

Ms. Caines’s said she had listened to different instruments all over the world but the solo erhu performance from Linda Wang touched her heart.

“I find it incredible that you can get such beauty out of two strings,” she said. “It was wonderful, I just loved every bit about it.”

“The erhu is incredibly expressive, capable of imitating sounds from chirping birds to neighing horses,” the website states. “Its melodies can be tender or sonorous or especially stirring and somber, a quality eminently suitable for conveying the grand pageant of China’s history and the emotions of its people.”

“I think they’re so incredible and so strong … I think it’s awesome … I have nothing but admiration, they’re wonderful.”

Ms. Caines appreciated the glimpse into China’s 5,000 years of history and culture and felt it was very sad Shen Yun could not be seen in China today. As a younger person she realised then how very powerful meditation is and how so many people are frightened of it.

“Just allow me to learn and I’m very grateful to that,” she said.

“I was so disappointed and surprised that in this day and age they couldn’t perform at home.”

She said she was looking forward to going to her Probus group and telling all her friends about Shen Yun.

“There’s a lot of women who will find out about it [Shen Yun].”