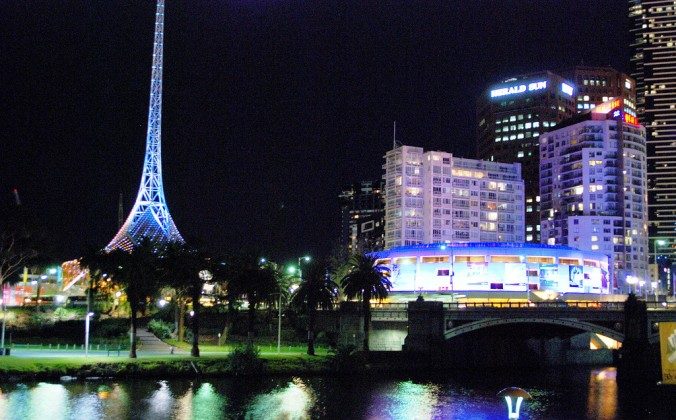 Melbourne’s iconic Arts Centre which has a 168 metre spire that looks like the Eiffel Tower. (Win Naing/Epoch Times)

MELBOURNE, Australia—Melbourne’s Lord Mayor Robert Doyle says his city has had a bond with China that dates back to its earliest gold mining days, he wrote in a welcome note to the internationally-acclaimed Shen Yun.

“Since then, Melbourne’s affinity with the Chinese community and appreciation for its rich culture has grown substantially,” Mr. Doyle wrote to Shen Yun.

But Mr. Doyle might be surprised to learn just how substantial the bond has now become.

For the first time, the trombonist will perform in front of his home crowd when the New York-based company opens at the Melbourne Arts Centre, State Theatre, from Feb. 25 to 28.

Mr. Crawford said he had been looking forward to coming home to Melbourne, hailed as the Arts capital of Australia.

Mr. Crawford joined the Shen Yun orchestra in 2012. Prior to that, he performed with the Melbourne Symphony Orchestra, the Royal Melbourne Philharmonic, and the Melbourne Opera Orchestra, among others, according to Shen Yun website.

Shen Yun has one other Australian performer within its fold, principal dancer Dan Li from Sydney. Mr. Li was also thrilled to be home to perform a 10-show run in Sydney where he was born and bred.

Shen Yun was formed in 2006 with a mission to reawaken China’s true divinely-inspired cultural heritage, almost brought to extinction by 65 years of communist rule.

“From the moment the gong is struck to herald the beginning of the performance, audiences know they’re in for a treat,” says the Shen Yun website.

“In Chinese, Shen Yun means ‘the beauty of divine beings dancing,’ which is just what Shen Yun does,” the website says. “Known for its incredible flips and spins, and its gentle elegance, classical Chinese dance is one of the most rigorous and expressive art forms in the world.”

And its music by the Shen Yun orchestra is lauded throughout the world as a trail-blazer in the world of classical music. Known for its unique combination of ancient Chinese instruments and Western symphony orchestra, audiences at both the renowned Carnegie Hall in New York and the Kennedy Centre in Washington, gave 10-minute-long standing ovations.

Senator Janet Rice lauded Shen Yun in a congratulatory message of welcome to the New York-based Shen Yun as well.

“I applaud Shen Yun’s important role in sharing over 5,000 years of traditional Chinese culture and history through performance, which also celebrates the rich and diverse fabric of our own Victorian community.”

Her sentiments were joined by the Hon. Luke Donnellan MP, Minister for Roads and Safety for Ports.

“Shen Yun has continued to captivate audiences around the world giving them a rare insight into the beauty and vibrancy of Chinese traditional culture,” Mr. Donnellan wrote in his greeting.

“The talent of the Shen Yun performers is undoubtedly something to behold and we are fortunate to be given the opportunity to witness a performance again.”

“I look forward to yet another amazing show and wish you the very best of luck for many years of continued success,” the state official said.

The last leg of the Shen Yun Performing Arts New York Company’s 2015 World Tour Down Under is drawing to a close ending on Saturday evening, Feb. 28. The company will then continue to a marathon run of shows in Taiwan with 38 performances, then Japan and Korea before returning to the United States some time in May.