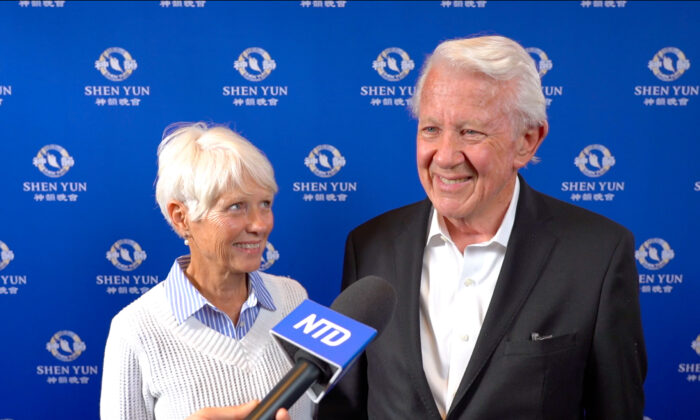 INDIANAPOLIS, Ind.—Retired businessman Michael Parrott had heard a lot about Shen Yun Performing Arts, more than enough to inspire him to travel with a friend from Fort Wayne to Indianapolis to watch the company perform at the Clowes Memorial Hall.

“We came a long way to see [Shen Yun],” said Mr. Parrot, who had invited his friend Jane.

Mr. Parrott is the former owner and chairman of several businesses, including Grange Insurance, Group Delphi, and Highmark Technologies. He has 50 years of achievements in business and community service.

New York-based Shen Yun is bringing back to the world China’s ancient cultural arts in the form of classical Chinese dance, storytelling, and music that have all but vanished under the communist regime’s rule.

“I enjoyed everything,” Jane said. “The dancing, the music, the history, the color. It was just very uplifting, and spiritually, very soothing.”

Jane described herself as a very spiritual person.

“I felt that the Chinese people can carry long-held beliefs forward through this beautiful antrum of dance and music, [it’s] magnificent because it just spreads to everyone,” she said.

Shen Yun is translated as “the beauty of divine beings dancing,” in reference to the deep, spiritual nature of Chinese culture. The classical Chinese dances presented by Shen Yun narrate China’s 5,000-year history, while ethnic regional dances take the audience on journeys from the Mongolian plains to the Tibetan plateaus.

Mr. Parrott said he had been swept away by Shen Yun. “The colors were resplendent and the dancers were magnificent … [the] music extraordinary. And the backdrops and all the dynamics, I loved it.”

He attributed his joy and feelings of being very uplifted to the combination of the music, color, dance, and backdrops. The performance exuded a positive spirituality that Mr. Parrott said was touching.

“It gave me a little additional insight into ancient China,” he said. “It was a wonderful performance and I can’t believe that [Shen Yun does] different performances each year, so we’ll have to come back and see the next one.”

Mr. Haney, a pastor from the Spirit of Joy Church, remarked how he appreciated the performance’s emphasise on the virtue of truthfulness.

“That’s kind of rare nowadays. We don’t always get truth, and so to hear [people whose] mission in life is to speak the truth, is a wonderful character trait and belief. So that meant a lot to me in a world that is losing that [ability],” he said.

“[The performers’] love and their compassion and their dedication to faith is wonderful. I love their message regarding atheism and evolutionism—that was refreshing and it’s a statement of the truth, and often that’s not heard, so that was really a fantastic moment,” he said.

Mr. Haney had praise for the dancers and erhu soloist.

“The precision of the dancers and the way in which they used their costumes to blend into the dance was amazing. The Chinese traditional two-string violin, the erhu, was also fantastic,” he said.

Miss Haney appreciated the diligence of Shen Yun’s performers. “I used to be a dancer. I can certainly appreciate all of the work and talent that goes into [Shen Yun],” she said.

She said she also learned something new.

“What really impressed me was the erhu. I had heard of this instrument [but] I’d never gotten to really hear it play or hear how special it was to the tone of Chinese music. You could feel your emotions just fluctuate as the piece progressed and it’s amazing that here, an instrument with only two strings, could accomplish something like that,” she explained.

“I haven’t seen any great things happen through communism. It’s repressive and it’s so nice to see people come and speak the truth,” Mr. Haney said. “I loved the message.”