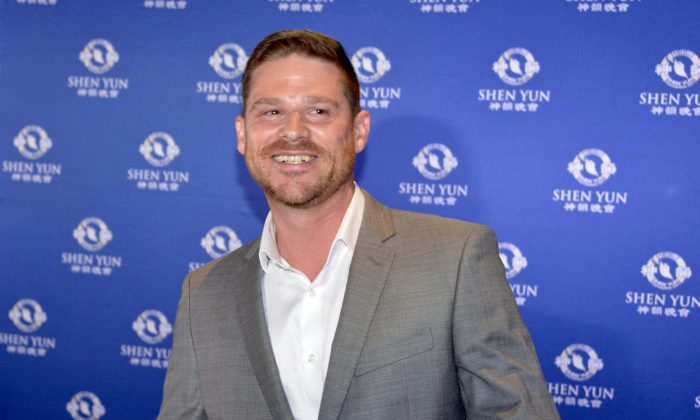 WELLINGTON, New Zealand—The opening performance of Shen Yun Performing Arts at St. James Theatre on Feb. 16 was a ray of sunshine on a cloudy day for the audience. David Montgomery was delighted with what he experienced.

He felt Shen Yun was more than music and dancing; he said it gave him an inner glow in his heart.

“It’s got a sense of wonder and spiritual essence … a warm fuzzy feeling,” he said, that made him feel “happy, very happy. Excited and quite warm [inside].”

Based in New York, Shen Yun has classical Chinese dance at its heart. But audience members soon realize the performance is so much more.

Mr. Montgomery really enjoyed the whole experience of Shen Yun and felt there was an inner beauty, an energy emanating from the dancers.

“It was wonderful! I loved it! I was smiling the whole time,” he said. “I could feel the dancers were projecting their beauty, energy and beauty.”

He felt it was best summed up as the “spiritual essence” of the culture that was coming through, because of the energy of the dancers.

“It was a good combination of technology and modern, or traditional dance. It just went really well together,” he said, referring to the state-of-the-art digitally animated backdrop.

“I loved it, I couldn’t stop smiling every time they would take off into the distance. I thought it was fantastic. Amazing!” he said.

The Shen Yun website states, “Shen Yun’s digital backdrop team creates vividly animated settings, extending the stage and transporting the audience to a world where heaven and earth are one.

“These digital backdrop designs complement and synchronize all aspects of the performance: the characters, colour of the costumes, specific dance movements, props, lighting, the story being told, particular notes played by the orchestra, and special audio effects.”

Mr. Montgomery felt the backdrops added an extra dimension to the performance. “It definitely enhances it, I think it’s a wonderful thing to see and it makes it interesting, I loved it,” he said. “Beautiful, absolutely beautiful.”