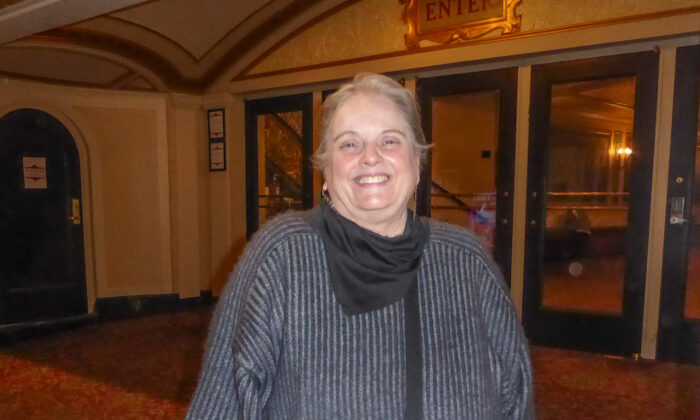 SCHENECTADY, N.Y.—Shen Yun Performing Arts was an exciting event for Carol Bradshaw, who has been an artist in many different forms.

Bradshaw has been a producer, actor, singer, writer, and Vaudeville expert who has also produced shows for Broadway and made documentary films. In 2015 she even produced “A Matinee of Vaudeville’s Vignettes” at Proctors Theater, where Shen Yun Performing Arts performed on April 15.

“I loved it. It was beautiful,” Bradshaw said of Shen Yun.

She praised the delicacy, harmony, and synchronicity of the dancers.

She also said it was very educational and stated she was fascinated because she had wanted to see a performance that depicted ancient civilizations.

Bradshaw noted that many elements of modern dance had been passed down from Chinese traditional culture.

She could feel the energy from the performers. There was also a glow in the theatre, she said.

“I think that [Shen Yun] embraces global societies and shows us about love and compassion,” Bradshaw said.

“[It’s about ] carrying our traditions with us through time,” she said while adding that there was a lot of spiritual energy in the performance.

Shen Yun is reviving China’s ancient 5,000-year-old culture through story-based classical and folk dances and music. This culture was largely destroyed under the Chinese communist regime.

Bradshaw’s said she also learned that under communism, people are not permitted to express themselves freely.

Shen Yun gives hope, she said. There is expressiveness, delicacy, and gentleness in it. One realizes that there is  humanity and compassion [in the world.] This is expressed through the synchronicity of the dancers and their professionalism, Bradshaw said.

Producing Shen Yun was a remarkable feat, she said, adding that such an undertaking is “challenging on many levels.”

As a producer, Bradshaw was able to make an observation.

“I learned a lesson that Americans aren’t as cooperative,” she said laughing. “I mean, that we’re, we’re a breed that likes to do our own thing and not be so cohesive. [Shen Yun] was very cohesive. And there’s an ensemble effort in [Shen Yun],” she said.

She is now semi-retired but continues to work with young people, producing a show about every few years.

Bradshaw wanted to congratulate Shen Yun’s producer. She encouraged him to continue with his good work because there was a lesson in Shen Yun for everyone.

“We’re all on this globe, we are in bad straits right now and we need …  this kind of art form to remind us about humanity and compassion and cooperation,” she said.