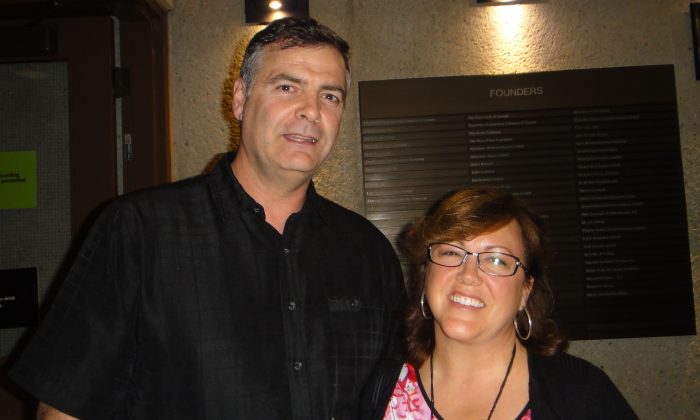 Jean and Jackie Fortin came to see Shen Yun on May 6, 2016 at Centre In The Square. (Dongyu Teng/Epoch Times)
Canada

KITCHENER-WATERLOO, Canada—Before a violent revolution forced atheism on the Chinese people, they called their country “the land of the divine.” Now a New York-based group is working to revive traditions all but lost, taking refuge overseas and drawing the best performers from around the world.

Shen Yun Performing Arts performed to a full house at Centre in the Square on Friday night. Audience members delighted in the colourful costumes and intricate choreography, but it was the deeper implications of the performance that moved some to more profound reflections.

Sandra Johnstone, case worker and counsellor brought her daughter, Jasmine Mohammed, to Shen Yun as a gift for the girl’s 14th birthday.

She was happy when asked what she thought of the performance that evening.

“Its amazing, amazing,” she said.

“The message is really good, there are beautiful singers, the instruments are wonderful—it’s beyond your imagination almost. The scenery behind the dancers is amazing and it gives you a good history of China.”

“I liked it, I thought the dancers were really pretty,” she said.

Ms. Johnstone said Shen Yun left her with a deeper understanding of Chinese culture, a culture we are not exposed to and that is not represented in China today.

“There is more to their culture then what we hear in the political arena and that is really neat, that is really interesting. There is a spirit of the people that has lived on for 5, 000 years … It’s like there is something going on that has lasted throughout all of the different types of things that can’t be suppressed,” said Ms. Johnstone.

Shen Yun was founded on a mission to revive China’s divinely inspired culture. While historically China was a deeply spiritual society rooted in the traditions of Buddhism, Daoism and Confucianism, that changed suddenly after the communist revolution in 1949. The decade-long Cultural Revolution that started in 1966 was the climax of a systematic effort to stamp out China’s traditional culture and replace it with communist atheism, a policy that has continued to this day. Some of this year’s dances touch on these events.

“There is a heavenly realm that is beyond what this earth shows,” she said.

This is a belief that was integral to Chinese society for thousands of years, one that Shen Yun seeks to bring back into relevance.

Rick and Margaret Burgess, a retired clergyman and secretary respectively, also appreciated the different dimensions of the performance.

He said he very much enjoyed the spiritual aspect of the performance.

“It is truly sad that the persecution is still happening. It’s bothersome. It’s good that the show continues in spite of that,” she said.

“It’s educating us that it’s still going on and gives us a glimpse into the kind of spirituality that was traditional, and it’s not too far away from what we believe,” added Mr. Burgess.

“I feel hopeful that some of the spirituality of the past in China has an opportunity for revival,” he said.

“Perhaps the excitement that audiences will feel might influence what happens in China and people who are practicing traditional religions will be respected again,” he said.

Jackie and Jean Fortin took their seat that evening next to someone who comes every year.

“There was a Chinese woman beside me who had seen it 7 times. She was very touched, I could see the tears in her eyes. Most likely she could relate to the storyline, and that touched me,” said Mr. Fortin.

Mrs. Fortin praised several of the dances and the strength and agility of the dancers. She said the performance left her feeling elevated.

“It was very encouraging, very uplifting,” she said.

“It was definitely uplifting, there was a sense that I am not to give up,” he said.

“If someone is down, if you come and see something like this you can certainly leave refreshed and encouraged to just keep moving. I really enjoyed it, great performance,” he said.