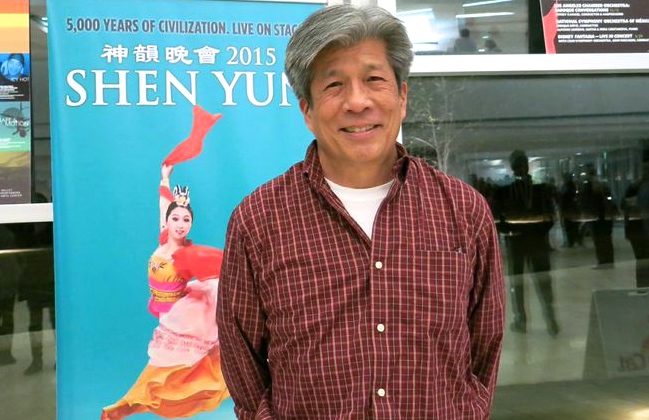 NORTHRIDGE, Calif.—Tickets for the spectacular Shen Yun Performing Arts World Company at the Valley Performing Arts Center on Jan. 27 were sold out a month prior to the performance.

For many in the audience, Shen Yun served as a refreshing oasis from everyday life through a magical glimpse into China’s glowing past. The New York-based classical music and dance company strives to revive China’s 5,000 years of authentic culture—thought to be divinely inspired—which was once nearly lost.

“I’m very, very glad we came,” said veteran Hollywood actor Richard Narita, whose career spans 40 years. “It’s just so beautiful and so precise, and the men are very strong, and the women are just incredibly beautiful to watch. It’s a beautiful show.”

A Shen Yun performance captures the essence of traditional Chinese culture through the richly expressive medium of classical Chinese dance. A live orchestra with both Chinese and Western instruments integrates seamlessly with the dances on stage, which each tell a unique story, complete with dazzling costumes and an interactive, digital backdrop. Solo musical numbers round out the experience, while charismatic bilingual hosts introduce each piece of the performance.

In regards to traditional Chinese culture, Mr. Narita said, “I’m not that familiar. My wife is Chinese, and I’m Japanese. We’ve been married for 35 years, and I still don’t understand it.”

But the experience of Shen Yun helped him gain a new appreciation for the culture of what was once known as the Divine Land.

According to the Shen Yun website, “Whether set in the past or in contemporary China, every dance embodies traditional Chinese values. Ideals of loyalty, filial piety, and veneration for the divine are cherished and celebrated. Heroes are extolled for their compassion and tolerance as much as their courage or determination when facing adversity.” These values are told through stories of positive lessons for viewers that touch the heart and embolden the spirit.

“I think that the traditional values are very important for us to remember, particularly today,” said Mr. Narita. “I look at this and I feel hopeful for the future. Even though sometimes I despair about what’s going on, I feel hopeful, and this actually makes me feel stronger to face my problems.”

Mr. Narita bought the Shen Yun tickets for his wife as a Christmas present. He said he would tell everyone about it and would definitely come again.

“I love the glorious colors,” she said. “The dancers are glorious. Such coordination and beauty; not a flaw in it anywhere. And the music – it’s just from heaven. It is just beautiful.”

As a writer, she particularly liked the story line, which she said was “magnificent.” She appreciated the recognition given to creation and the Creator and was touched by the characters’ demonstration of compassion.

“We all have a choice to be compassionate or to be hard-hearted,” she said. “How important it is to have an open heart to our fellow man, and to reach out whether it’s a lost article or just an act of kindness in general … I hope that all of us as human beings will have that kind of compassion as we live in this world.”

The Divine Land, or Celestial Empire as China was once called “refers not only to China’s strength and position as East Asia’s Middle Kingdom, it also captures a more profound meaning, describing a land where the divine and mortal once coexisted. It refers to the belief that the divine, through various dynasties, transmitted a rich and abundant culture to the Chinese people,” according to the Shen Yun website.

Ms. Beckerdite said she considered it a privilege to attend the performance and wanted to thank the artists for their years of hard work and dedication. She said the dancers reminded her of beautiful flowers floating around on stage.

“I’ll probably go home and write a poem about it,” she said.

Truly One of a Kind

“It was magnificent. I’ve never seen anything like it in my life,” said motivational speaker and author Jim Brown. “We’ve been to 106 countries, we’ve seen art all over the world, and this is by far the most unique thing I’ve ever seen.”

Even though decades of communist rule have nearly destroyed traditional Chinese culture and values through systematic campaigns like the Cultural Revolution, Shen Yun has the artistic freedom outside of China to bring these ancient traditions to the world’s most prestigious venues.

He was inspired to emulate the traditional values brought to the stage. “Not to allow the negativity, the fear, the anger of others to influence who we are. And that we’re here to learn how to love each other, how to share, how to be compassionate, how to take care of each other,” he said.

He praised the performing arts company’s creativity in pioneering the use of its interactive animated backdrop, on which characters paint objects with a magical brush or dancers seem to fly off into the air.

He said the costumes were exquisite, the dancers were elegant and athletic, and the music was amazing. He appreciated the hosts’ introduction in advance of each dance and music piece. Overall, he said the grandeur of the performance was difficult to explain.

He said he would “absolutely” come back next year.