Shen Yun Gets Back to What’s Real 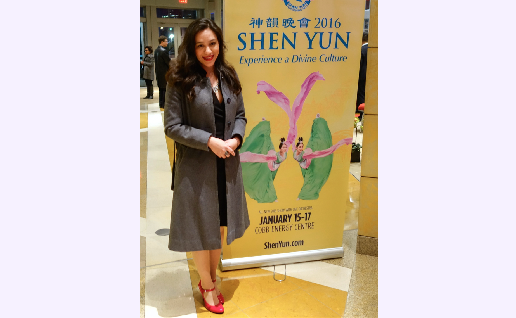 Ximena Garcia loved the performance by Shen Yun Performing Arts she saw on its opening night in Atlanta, Jan. 15, because—bottom line—its message was getting back to what is real. (Mary Silver/Epoch Times)

ATLANTA—Ms. Ximena Garcia loved the performance by Shen Yun Performing Arts she saw on its opening night in Atlanta, Jan. 15, because—bottom line—its message was getting back to what is real, to what is important.

On the surface, Shen Yun, based in New York, is a Chinese dance and music company with some of the finest performing artists in the world. Gifted vocalists perform the difficult bel canto style of singing; a one of a kind orchestra seamlessly blends both Western and Eastern instruments; costume colors dazzle, and digitally animated backdrops amaze; and the dancers—the dancers perform flawlessly with fluid grace.

But the company’s mission goes deeper than its artistry.

The artists who formed Shen Yun believe that the greatest art of all time looked toward the divine for inspiration. The company website asks us to consider Michelangelo’s Sistine Chapel. Painted across the ceiling are multiple stories revealing the bond between God and man.

“You can feel this connection between art and spirituality beaming down from the high ceiling’s apex where God reaches out to touch Adam’s hand,” the site states.

In similar fashion, but played out in time and music, Shen Yun uses classical Chinese dance to sweep through China’s 5,000 year civilization—telling stories from the culture’s divine inception, to the present day struggle of people of faith’s travails to survive under communist rule.

And people relate to this message. “I really liked that they say we come from a divine being,” said Ms. Garcia, at Atlanta’s Cobb Energy Center.

The Clayton State University student believes that we get caught up in technology and scientific theories and forget what’s really important in life: our own spirits.

She said that everything in the world is a mess now because people have lost their connections to their own spirituality.

“What it comes down to is what is in your heart and your soul. That’s what really touched me. The performances were amazing, but the theme of everything … kind of [goes] back to what is real,” she said.