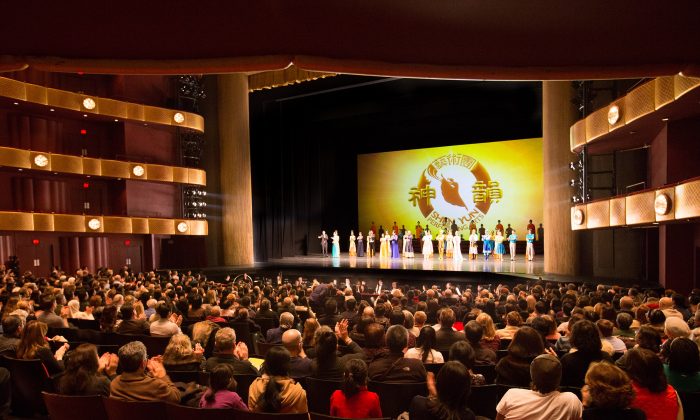 NEW YORK—Like many New Yorkers, Caila Desroches had seen the colorful Shen Yun Performing Arts advertisements around the city and for years wanted so much to see a performance. For the New Year, her husband surprised her with tickets.

“I was crying and everything,” Ms. Desroches said with sincerity. “I’m so glad I came, I really am. I have to tell other people about the show, to have them come.”

The performance was “full of life,” she said, and aptly named to describe “divine beauty.”

Shen Yun, as the emcees explained, means something like “the beauty of divine beings dancing.” “Shen” means divine, and “yun” comes from the classical Chinese dance performed, a term that describes the feeling behind a movement. Through the arts, the New York-based music and dance company aims to revive 5,000 years of a divinely inspired culture.

Ms. Desroches, a former professional basketball player in Europe, said when she was watching Shen Yun, she just felt free.

The artists seemed so free to express themselves and their culture, she said, and in turn made her feel free as well. While Shen Yun cannot perform in China, where the traditional culture has been suppressed under communist rule, it tours globally in over 100 cities each year, sharing the culture around the globe.

“It was stunning,” Ms. Desroches said. “I actually got chills.”

The traditional culture is deeply spiritual, and Ms. Desroches said she recognized that in many of the stories. She could see the dancers’ spirits on stage, she said, and whenever their character’s spirits were down, it was the divine that picked them up. It is like that across cultures, she explained, and an uplifting belief she related to personally.

It was knowing a higher power is up there, and will pick you up and be there for you, she said.