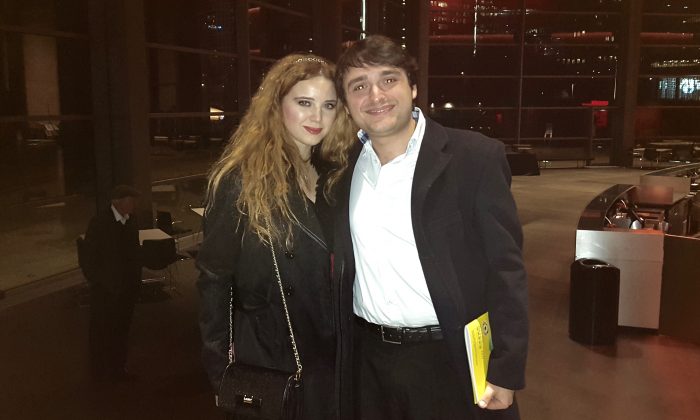 DALLAS—Pianists Alessandro Mazzamuto and Chiara La Ferla were in for a new world of instrumentation seeing Shen Yun Performing Arts in Dallas. Both classically trained musicians, the pair zeroed in on the lone erhu, pipa, and suona sitting in the orchestra pit amid the vast production at the Winspear Opera House the evening of Jan. 2.

With glee, Ms. La Ferla explained how new and exciting it was, and Mr. Mazzamuto spoke of uniqueness and inspiration.

“The instruments are absolutely fantastic. I have never heard this sound—it’s clear, this is a traditional China,” said Ms. La Ferla, a pianist and singer studying music at a university in Italy.

The orchestra is indeed unique as traditional Chinese instruments are harmonized with a full symphony orchestra.

As New York-based Shen Yun aims to revive 5,000 years of traditional, divinely inspired Chinese culture, the dances are accompanied by all original compositions that have a distinctly Chinese sound.

Mr. Mazzamuto explained the difference in the “texture” of the music in Shen Yun, and how the instruments perfectly characterized that texture.

For instance, the erhu—a 4,000-year-old instrument often referred to as a Chinese violin—was very different for him: “It’s more nasal, but it’s a very rich sound—it can be very sad. It’s a different timbre, a different kind of sound, a sweet sound.”

Mr. Mazzamuto was the winner of the International Classic Music Awards’ 2013, Instrumental Artist of the Year, and has won more than 60 international competitions in piano and chamber music. He said he recently has started to think about composing as well, and Shen Yun filled him with ideas.

“Why not? If I compose something, I think I will make something with these kinds of instruments,” Mr. Mazzamuto said. “We can take inspiration, we can use it to help our brain, our creativity.”

“Everyone should start to learn more from the other cultures because I think this is the way to make better music.”

Mr. Mazzamuto characterized the creativity of the performance as a vision: Someone had imagined what they wanted to show about China’s vast history. They succeeded, in his opinion, as the history was in the “soul of the music.”

Ms. La Ferla thought Shen Yun’s elaborate silk costumes, one of the hallmarks of the company, were “so precious,” and she was amazed at how much was communicated through the performance.

It was not just dance, not just music, but the entire history of China, she said.