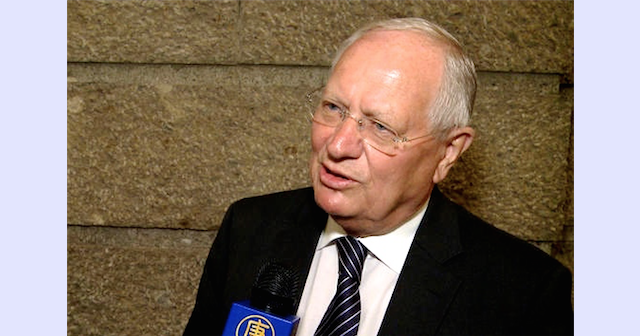 SALZBURG, Austria—When Shen Yun performed in the Salzburger Festspielhaus on April 21, 2015, one journalist said he felt it kept its promise and more. Mr. Herbert Dryzga is a freelance journalist from Munich.

There was a natural beauty in their bearing.
— Herbert Dryzga
According to the Shen Yun website, “Art was meant to uplift, bringing joy to both the people who created and experienced it. It is this principle that drives Shen Yun performers and their art.” Mr. Dryzga seemed to respond to that noble intention. He said, “It is inspirational to see the grace and humility of these performers. There was a natural beauty in their bearing, and their facial expression exhibits no haughtiness. These performers are people who, despite of their accomplishments, remained just as they were before they became performers.”

He also noted the refined artistic skill of the dancers. “Marvelous show overall, but especially the dancers’ movements were something exceptional. The young ladies made these little steps that in my opinion are an artistic feat. One can only achieve that after years of training,” said Mr. Dryzga.

He had seen trailers promoting the performance, and had wondered if they were realistic, he said. “I wondered before I saw the show, if the previews were really what was presented by Shen Yun. Yes, Shen Yun was all that it promised and even more. I am very happy that I was able to see this show.”

Dr. Herbert Resch, a surgeon, and Ms. Maria Resch, a teacher, came to see Shen Yun. Dr. Resch felt uncertain before the performance, he said. He was not sure what to expect. He was curious, yet he was going outside of his comfort zone by seeing a kind of art he had not experienced before.

He was pleased that he took the chance. “I was amazed during the entire show. The movements and the dances were very graceful. I felt a harmony I had not experienced before. The dancers were incredible, and the music was amazing”

“I felt relaxed and content by the end of Shen Yun,” said Mr. Resch.

“Through the universal language of music and dance, Shen Yun weaves a wondrous tapestry of heavenly realms, ancient legends, and modern heroic tales, taking you on a journey through 5,000 years of Chinese culture. Its stunning beauty and tremendous energy leave audiences uplifted and inspired,” said Shen Yun on its website.

“The music sounded familiar to my ears and was something that one certainly can get accustomed to,” Mr. Resch said.

Ms. Resch agreed with her husband and said, “Shen Yun was fantastic, poetic, and a unique experience. It was like an enchanted world.”

Reporting by NTD Television, Florian Godovits and Heide B. Malhotra