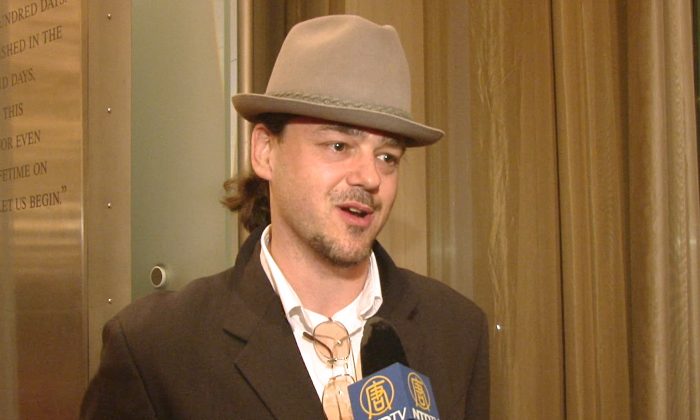 Mr. Schultens said he was an artist as well; he majored in dance in college.

“I think the Shen Yun is a very well-polished performance. Very beautiful movements, and also the sound design is really incredible,” he said.

“I really enjoyed the performance. It was wonderful to see the whimsical integration of the animation in the backdrop that accompanied the dance performances.”

Mr. Schultens is professionally in broadcast media and so he understands some of the mechanics involved in a production like Shen Yun.

Changing the discussion back to the actual performance, he said, “The lady next to me was really quite scared by the dragon,” in the scene from Ne Zha Churns the Sea.

According to the Shen Yun program guide, the dragon was an “evil Dragon King.” The story is about “An idyllic seaside village meets with near-disaster when the evil Dragon King terrorizes its residents.”

Mr. Schultens spoke of Falun Gong, the spiritual practice that has been persecuted since 1999 by the Chinese Communist Party.

“Touching me personally is the bold statement honoring Falun Gong, and honoring compassion, and the suffering people are enduring under the current Chinese regime.”

On parting, he said, “This is my first time to see the performance. I’ll definitely introduce it to my friends.”