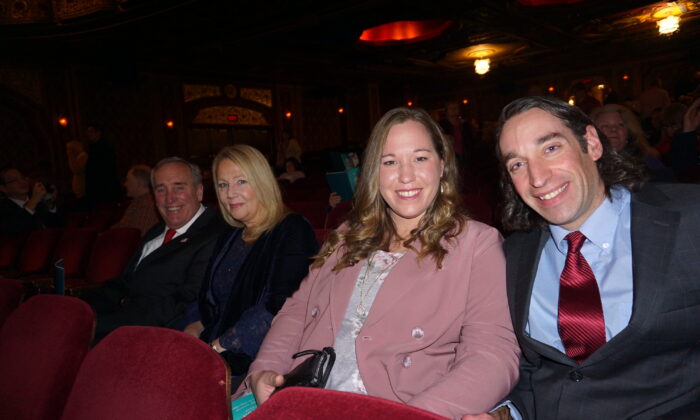 PROVIDENCE, R.I.–Adam Peterson, a project manager in construction, went to see Shen Yun Performing Arts with his girlfriend and parents.

“This is an amazing performance full of passion and art. And you can feel the energy, and that culture is just brought to life. That’s something you don’t get to see every day,” he said on Jan. 18, 2020 at the Providence Performing Arts Center.

Adam had the idea of coming to see Shen Yun, which led to his parents buying tickets for him and his girlfriend as well as for themselves. His parents, Donald and Linda Peterson, thought the performance was visually beautiful and appealing. His girlfriend said she loved it.

Based in New York, Shen Yun is a performing arts company aiming to revive China’s 5,000 years of traditional Chinese culture through classical Chinese dance and music. The company was founded in 2006 and has been performing around the world ever since.

Adam said he learned of China’s history and culture from watching the performing arts company, describing it as beautiful and colorful. But that was not the only thing that he took away from the performance. After watching a dance illustrating the story of the Creator, Adam came to an understanding about humanity.

“I just think it’s amazing. You look at different cultures and they have a sort of similar creation story, the Christians and the Chinese and everywhere you look, they’re talking about how some divine Creator made everything. We may be a little bit different, but our stories are kind of the same,” he said.

Adam expressed that he was moved by this universal value Shen Yun has shared with its audience.

“I think it was inspiring. I think it’s neat, it kind of connects people. Everybody kind of has this deep feeling inside, that there’s something else out there. It’s not just us,” he said.

Adam found the artists of Shen Yun amazing and said he supports what they are doing.

Chip Highfield brought his friend Sallie Dunning to see Shen Yun, as he knew that she would love it. It turns out that he was right.

“I loved it. I loved learning so much, about Chinese dance and culture. And history. The costumes and the choreography were amazing. Chip talked a lot about the precision. They were so in sync and tightly choreographed pieces. The women looked like they were floating across the stage. I loved it!” she said.

Dunning works with elementary school teachers and Chip is involved in financial investments. This is Highfield’s second time in seeing Shen Yun’s performance, and likely not his last.

“Top rate!” he said. “[I was] very excited and sometimes just taken into a fantasy world and just amazed by what’s going on in front of me.”

With reporting by Sally Sun, Weiyong Zhu, and Don Tran.