Shen Yun Fascinates and Uplifts Through Refreshing Form of Art 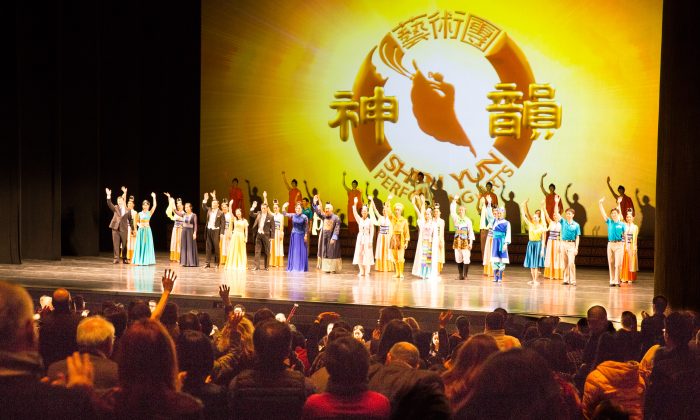 NEW YORK—In 2006, a small group of artists from around the world came together in upstate New York to form a performing arts company, with a lofty goal: to revive a 5,000-year-old culture and share it with the world.

According to New Yorkers, Shen Yun has achieved that goal.

Anne Bosch, a tax accountant, saw Shen Yun two years ago and said it was so fabulous she had to come back and bring her daughter Karen and her daughter’s husband Eugene Petrov to the performance.

The two of them run a ballet studio, Ms. Bosch explained, and she knew they would enjoy this.

The Petrov Ballet School is dedicated to providing quality training in and the appreciation for the art of classical ballet, believing that proper training is the cornerstone of successful education for young dancers. It will give them all the tools they need to succeed.

Of Shen Yun’s dancers’ training, Mr. Petrov’s opinion could only be described as deeply satisfied.

Mr. Petrov began his dance education in classical ballet and character dance—a style of dance inspired from national or folk dances, interpreting modes of living or personality. Thus he could relate to the mentality of the performers on stage, who presented—along with classical Chinese dance—an array of folk and ethnic dances, like a Tibetan dance and a Mongolian dance.

The characterizations plus the drama of the presentation via a digital backdrop and the many costumes was fresh for Mr. Petrov. “That’s what makes it special,” he said.

Mrs. Petrov gestured, noting the differences and similarities of classical Chinese dance to forms she was familiar with.

Classical Chinese dance is the foundation of a Shen Yun performance. Formed over thousands of years, the independent dance system is almost as old as the culture.

“Very energetic!” said June Jaffee, executive director of the Muriel F. Siebert Foundation. She attended the performance with Robert Smith, an economist, and the two were very entertained by the newness of it all.

Despite its 5,000 year old legacy, the traditional Chinese culture was nearly wiped out in the ’60s, after communism took power in China and worked to uproot and destroy traditional culture and beliefs.

The athleticism of the dancers had impressed Ms. Jaffee and Mr. Smith—a dramatic cartwheel performed almost in slow motion, a series of lightning fast flips across the stage—it had been energetic and full of motion.

The difficult aerial and tumbling techniques are an integral part of classical Chinese dance, and the dancers must master it all, according to Shen Yun’s website. And these are the techniques that spawned sports like gymnastics and acrobatics.

In a word, the experience was heavenly for her.

“The artistic part is fabulous, I think it’s more than worthwhile seeing,” Mrs. Gonzales said. She attended the performance with her husband, who laughed and said he’d enjoyed the water in the scenes—like a trip to the Dragon King’s undersea palace in a story-based dance about the Monkey King.

Mrs. Gonzales agreed: even the water captured that heavenly feeling she saw throughout the performance.

“The water is peaceful. It gave a sense of [being] between eternity and peace,” she said. “The colors, the costumes, the serenity, it has something sensual, something so soft in everything.”

“Just seeing them dance, you start to get involved in the fabulousness,” she said. That “heavenly” feeling was something like a softness, she said, even in the strong and athletic male dances. It was not something of the earth, but there was a sense that it was something from above.

Her assessment is not far off. Shen Yun explains that the name translates roughly into the beauty of divine beings dancing. “Shen” means divine, and “yun” means something like the feeling behind a movement. A name fit for a company that aims to show a divinely inspired culture through dance.

The performance itself was different, wonderful, and interesting, Ms. Gonzales said, because so many performances today are nothing like what Shen Yun is.

“It’s something no one should miss. More people should come see it, because everything you see nowadays, it’s so full of fury,” she said. “It’s nice to sit down and see something like this, where the colors are beautiful and the choreography. It’s very athletic, but at the same time, it’s very spiritual. So I think it’s a pity that one doesn’t see more things like this.”

For Janet Zelikovsky, a small business owner, Shen Yun was just uplifting. It spoke to what she deeply believes personally, and put her in a better state of mind.

“It’s basically supposed to be uplifting … it’s about the positive aspects of the human life and not negativity,” Ms. Zelikovsky said. She saw ideas of reincarnation, heaven, gods and mankind, and the “developmental trajectory, so you can eventually leave and go back and go back to being one of the higher beings.”

That is a belief from ancient China, according to Shen Yun’s emcees. Traditional Chinese culture is centered on the idea of harmony between heaven, earth, and humankind, and for thousands of years there was a reverence for the divine. It comes through, if one is looking for it, in the stories and legends told, in the classical Chinese dances, the settings projected on an animated backdrop, the songs, and even the costumes.

“It encapsulates a lot of ideas to do with the unseen and the seen worlds, and the way that color and music and dance can integrate into a cohesive whole, into a philosophical process of comprehensive understanding that enhances human life,” she said.

In short, “it was awesome.”