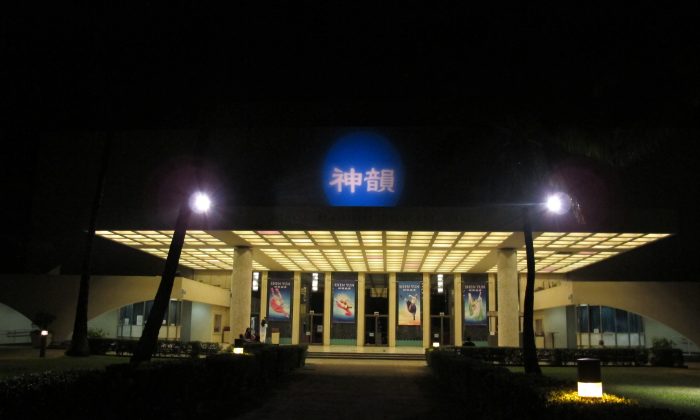 Ron Hooson, director of Technology and Quality at Smart Energy Hawaii, was thrilled to be at the event.

“I’m so honored and grateful to be here to enjoy the show,” he said.

Shen Yun is a non-profit, New York-based classical Chinese dance and music company that tours to over 100 cities in some 20 countries for six months out of the year.

The company’s stated mission on its website is to revive traditional Chinese culture—“5,000 years of civilization.”

“I am fascinated and intrigued by this show realizing that 5,000 years of Chinese history and the Bible says that the planet only existed for 5,000 years,” Mr. Hooson said.

Shen Yun’s website explains the significance of China being called the “Celestial Empire”: “It refers to the belief that the divine, through various dynasties, transmitted a rich and abundant culture to the Chinese people. Chinese culture is thus known as ‘divinely inspired,’ and is the only culture in the world to have a continuous recorded history of 5,000 years. It has left behind countless literary classics, historical documents, cultural relics, and national records reflecting its immense scope.”

Mr. Hooson was particularly impressed with the endurance of China’s civilization.

He said he was fascinated “to realize that this culture has more history than many religions have [one] believe the earth has history, and [China] made it through the Greek and Roman Empires, through the Japanese attacks of World War II, and it survives holding its precious heart and its precious soul from 5,000 years ago and its culture and its traditions.”

Another audience member watching Shen Yun, in May, was Allwyn Chao, a retired engineer from IBM.

“It’s very well done,” he said. He added that Shen Yun is more professionally done that a dance performance he saw in Shanghai last year.

A Shen Yun performance is like no other because of its multifarious features, each of which is exquisite.

Through about 20 vignettes, audiences are transported to different realms. From the Creator summoning heavenly beings to descend to Earth, to ancient myths and legends and even modern stories of courage, Shen Yun provides a comprehensive visage of Chinese civilization.

In addition, a wide variety of costumes are displayed because each piece is a story on its own and requires a different set of costumes.

“The costumes, the music, the dancing, it’s done very professionally. So we are very pleased with the performance,” he said.