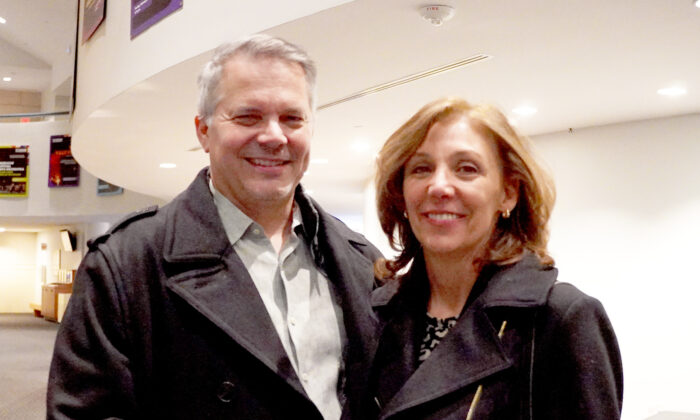 FAIRFAX, Va.—Chris and Susan Kachouroff, both attorneys, enjoyed Shen Yun Performing Arts on the eve of Chinese New Year, and saw in the “China before communism” presented through art something beautiful.

“Why does beauty matter? Because it’s a reflection of the Divine. And it’s what we should emulate,” he said.

“Shen Yun” translates into “the beauty of divine beings dancing,” and New York-based Shen Yun takes as its mission to revive through the universal languages of dance and music the 5,000 years of divinely inspired civilization that China once had, before communism.

“It’s what classical culture does, whether it’s Chinese or American, it takes the best that human beings create, and puts it together,” Mr. Kachouroff said.

For example, he said, Shen Yun’s orchestra took the best of a classical Western orchestra and blended it with the best of Chinese instruments. “They’re intertwining beautiful things,” he said.

“The vibrant colors, the fluidity of the dance, the comprehensiveness of the dance. And seeing for the first time where gymnastics comes from. It’s shocking revelation to see it all put together the way it should have been put together from, I don’t know, thousands of years ago,” he said. “The vibrant colors were unbelievable. The dancers were incredible as well. But for me, you know, the most poignant thing for me is the bold speaking out against atheism, evolution, and communism, indicted communism. And now I know why they won’t let [Shen Yun] in China.”

Shen Yun indeed cannot perform in China today, as the ruling communist regime has spent its time in power trying to—often violently—root out the traditional culture of China, which the Chinese once said was passed down by the heavens.

Mr. Kachouroff said that it’s likely the average American doesn’t understand what “China before communism” means, but communists would certainly understand it. “That’s the biggest indictment,” he said. He was impressed, too, that the portrayal of something as negative as communism did not end on a negative note.

“They tried to highlight the negative things about communism, but then have a positive outlook for the future to focus on the divine and what’s heavenly,” he said. “Because that’s what’s important.”