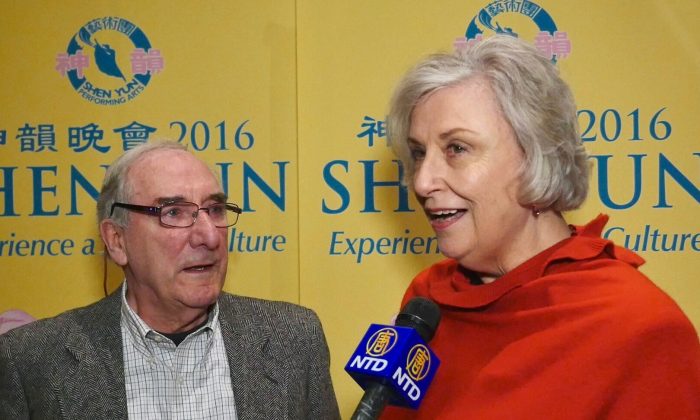 ATLANTA—”The world will not have peace unless we understand and have tolerance and compassion for one another,” said Kathleen McNulty, after seeing Shen Yun Performing Arts at the Cobb Energy Centre with her husband, Bill.

Mrs. McNulty, who formerly served as the director of volunteer services for the county, said that she and her husband were very spiritual people.

I thought it was the most elegant performance I’ve ever seen.
— Kathleen McNulty

“I thought it was the most elegant performance I’ve ever seen,” said Mrs. McNulty, who loved the performance.

She thought the costumes were gorgeous, and that their colors were mixed in unexpected ways that really worked beautifully when put together. “It was lovely.”

The couple were on a date night on Jan. 15—”A very special date to see the show,” said Mr. McNulty, who is also retired. He enjoyed the classical Chinese dance and the orchestra that combines sounds of both East and West.

“Great message of peace and unity,” he said, adding that they’d be back again to see the performance.

Curt Robins, a partner in a large national finance firm, was also in the audience on Friday. He has traveled through the Asia and said that Shen Yun was better than performances he’s seen in South East Asia. “It was awesome,” he said.

Mark Crutchfield, attending with Mr. Robins, thought the music was exhilarating. “It was unbelievable. You don’t get that anywhere,” he said. Mr. Crutchfield works in customer service for Infinity.

Of the overall evening, “very spiritual,” Mr. Crutchfield noted. “The message more than anything was to save the culture and beliefs of the Chinese people.”