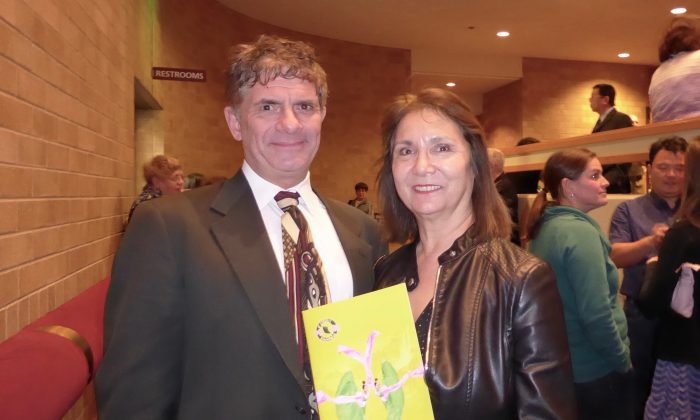 After seeing the colorful advertisements and billboards, she dug deeper. She learned that traditional Chinese culture was once almost destroyed in China by communists. She knew the communist regime had systematically worked to suppress freedom of belief and speech, though it was unclear to what extent. And she learned that Shen Yun is a classical Chinese dance company established in 2006 in New York with the mission to revive this traditional Chinese culture.

Despite having read up on all of this, just the first half of the performance was more powerful than Mrs. Carte imagined.

“It has exceeded my expectations,” she said during intermission at Boise’s Morrison Center on Jan. 19.

For thousands of years, a belief in the divine was at the heart of Chinese culture. The program book explains that bringing back this sacred aspect of performance is at the core of Shen Yun’s mission.

Both Mrs. Carte, who is a manager’s assistant in a large bank, and her husband David Carte, who is a retired bank manager, were surprised to learn that Shen Yun still cannot perform in China even today.

“You know, they had to jump through a lot of [h]oops and obstacles and threats just to get here. So it’s impressive,” Mr. Carte said.

Since the 1989 events in Tiananmen Square, Mrs. Carter said they just had not heard much about the situation in China. “If you don’t know about it … on the other side of the world, it just doesn’t enter into your everyday thoughts.”

Mrs. Carte said one song—a bel canto solo sung in Chinese—really brought the struggle of the artists and the situation in China home to her.

“I like the part in the song, where … she’s saying she’s risking persecution to help us, to save our souls,” she said.

According to Shen Yun’s website, the performances include bel canto soloists singing original Chinese lyrics that touch on themes of humanity, the meaning of life, and such philosophical topics. Audience members often say it reminds them of sacred music.

The program states: “In ancient China, artists used to cultivate virtue. They believed that art was meant to celebrate the divine and nurture goodness. The often practiced meditation and self-refinement, seeking to create art from a pure and humble mental space. Today, Shen Yun’s artists follow this noble tradition.”

“As an American, I’m glad that … they’re able to express themselves here,” Mr. Carte said.