Shen Yun, ‘Everything I Expected and More’ 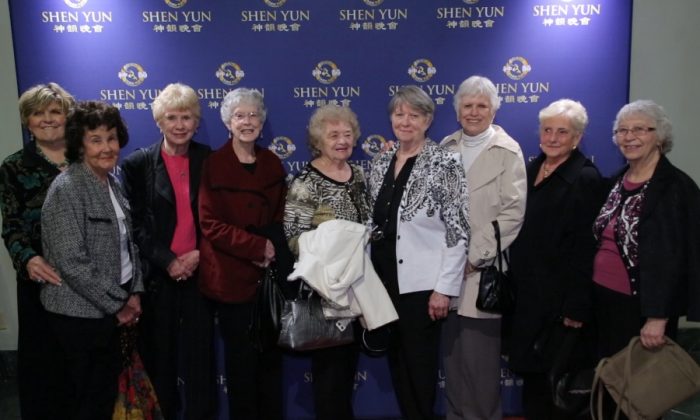 Charlotte Schulgen, a retired medical worker, invited her 11 friends to come with her to the performance, and Barbara Wood, a former funeral director, was part of the group.

“It was wonderful,” said Ms. Schulgen. “It’s everything I expected and more.”

“It was absolutely beautiful,” said Ms. Wood. “We thought this show was really good.”

Shen Yun is a New-York-based non-profit dedicated to reviving the true, divinely inspired culture of China, which has a history of 5,000 years, according to the company website.

“It was a well-spent evening,” said Ms. Schulgen.

Ms. Schulgen said the dancers were incredibly light on their feet, and their costumes were beautiful.

“They have a lot of talent,” said Ms. Wood. “Such ease and fluidity.”

Ms. Schulgen also enjoyed the interactive backdrops, which set the scene and add magical elements to each story behind the dance.

“It’s amazing,” she said. “I don’t know how they do it, but they do it. The backdrop, all the animation was just wonderful.”

“That was one of my favorite parts,” agreed Ms. Wood. “It really incorporated well into the whole act.”

Not only does Shen Yun present top quality performing arts, the performances also display principles from traditional Chinese culture, such as benevolence, justice, wisdom, respect for the heavens, and divine retribution, leaving audiences uplifted and encouraged, says the website.

Ms. Wood especially loved the parts of the performance that showed hope and courage.

“I thought that was inspirational,” said Ms. Wood. “Whether it’s doing right or wrong, or the courage … that serves you well in the end.”

Ms. Wood asked Shen Yun’s artists to keep doing such a great job and keep coming to Bakersfield. She said they were an inspiration to people.

The two friends encouraged others to see Shen Yun.

“If you have a chance to come see this show, please do. You won’t be sorry,” said Ms. Schulgen.

“Come and see it,” said Ms. Wood. “It’ll be a very unique experience in your life.”

Cher Pannell, a retired nurse who is now in charge of a non-profit in Oildale, Calif., said Shen Yun was “magical.”

“It is wonderful, it’s beautiful,” she said. “It’s not like anything else we’ve ever seen.”

Ms. Pannell praised the grace and athleticism of the dancers and said their costumes were lovely.

“They are so professional, and just so full of life and expression,” she said.

Ms. Pannell said she was also moved by the display of China’s ancient culture, and felt “wonder, and just amazement, and appreciation that this has been revived.”