Shen Yun, ‘Everything about it was really unique’ 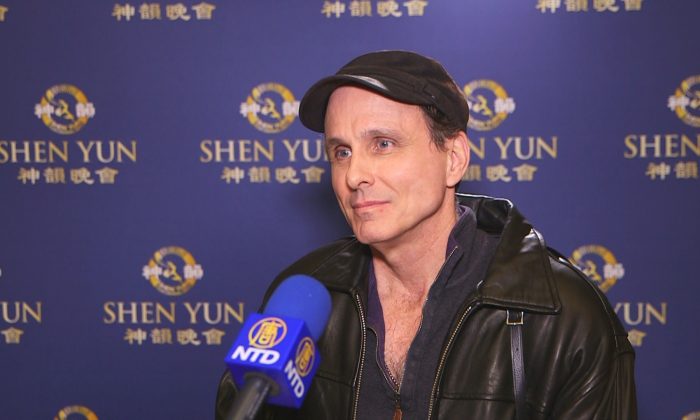 “It was absolutely wonderful,” he said of Shen Yun Performing Arts, a New York-based non-profit dedicated to reviving the true, divinely inspired culture of China, according to the company website.

Shen Yun brings an ancient perspective to modern entertainment, encompassing 5,000 years of Chinese history in one night. Richly expressive classical Chinese dance numbers are accompanied by a full, live orchestra with both Eastern and Western instruments. The dancers’ vibrant costumes complement the stunning, majestic backdrops, and vocal and instrumental soloists round out the performance.

The background projection technology really stood out for Mr. McCreery, as a video producer. He enjoyed how the dancers’ choreography interacted with the screen, making it seem that the dancers could even leap directly into the background and fly into the heavens.

“It was very impressive,” said Mr. McCreery. “Colorful, really well put together. The dancers looked like they worked very, very hard on this.”

Shen Yun brought up many emotions and feelings for Mr. McCreery that surprised him. “Peace, involvement, contentment, delight, surprise, wonder,” he said. “It wasn’t what I expected, but it was so much more than I ever anticipated.”

“Since ancient times, Chinese people have believed that divine beings, throughout various dynasties, transmitted China’s rich culture to humans. In particular, the three main religions of Confucianism, Buddhism and Daoism have been at the heart of this heritage. They have inspired spirituality and faith, while fostering reverence for values like benevolence, justice, etiquette, and wisdom,” states the Shen Yun website.

“I would say it’s a very unique and special show that really can’t be pigeonholed,” said Mr. McCreery. “I think anybody that checks the show out, they’re not going to be disappointed.”

He was very interested to hear that Shen Yun produces an all-new production every year, and impressed to learn that the non-profit has four separate companies touring around the world simultaneously.

“I plan on checking it out every year to see what’s new and exciting,” said Mr. McCreery.

Shen Yun, ‘Everything was perfect’

Ms. Lentini loved learning about and becoming immersed in the history of China during the performance, and she said she was just “floored by the precision and beauty.” The dance, costumes, choreography, backdrops, and stories all impressed her.

One particular dance called Phoenixes of the Sapphire Paradise, set atop a heavenly cloudscape, gave Ms. Lentini chills all over her body.

An instrumental solo performance on a Chinese two-stringed violin called the erhu also touched Ms. Lentini, and she said she felt a sense of peace and calm, and she wished she could listen to it some more.

Overall, she said Shen Yun overwhelmingly filled her with joy, peace, and harmony, and she was interested in looking more into Chinese history in the future.

“I’m thrilled for the opportunity to see it and be exposed to this kind of art,” said Ms. Lentini. “It’s wonderful. I would see it again.”