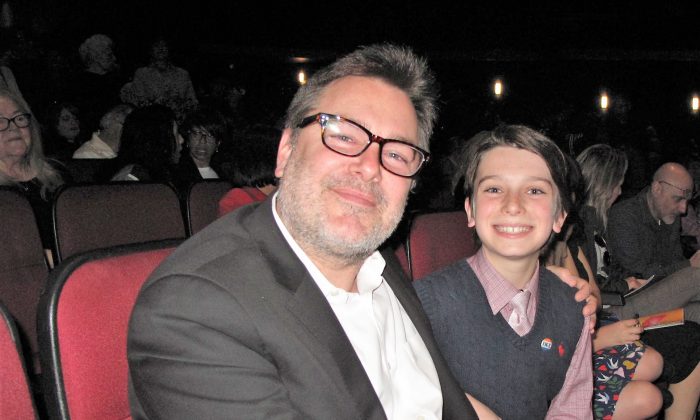 For the twelfth year, Shen Yun Performing Arts, a classical Chinese dance and music company, visited Los Angeles and performed at the The Microsoft Theater on April 14, 2018.

“I’m really enjoying it,” said Mr. Richling. “We were invited by a friend. I didn’t know much about it. It’s based on [traditional] Chinese culture, it’s banned in China, and this New York [company] is keeping the culture alive through this tour.”

Mr. Richling played bass for the Grammy award-winning band “The Wallflowers” from 1993 to 2013.

New York-based Shen Yun was founded in 2006, with a mission to revive the divinely inspired culture of China. It has five companies that tour the world simultaneously, reaching thousands of audience members each season.

“I applaud any culture that’s trying to sustain it’s history. That goes for many peoples that have gone through a lot of oppression. Struggling to keep the past alive informs the future,” said Mr. Richling.

“Throughout history almost every culture looked toward the divine for inspiration. Art was meant to uplift, bringing joy to both the people who created and experienced it. It is this principle that drives Shen Yun performers and their art,” states the Shen Yun company website.

“I think that [spiritual quality] emanates from the performance, and that’s what you’re feeling from these dancers and performers when they’re on stage,” Mr.Richling added. “There is a type of peace that emanates from within with what they’re doing.”

Shen Yun Symphony Orchestra blends the spirit of Chinese music with the power of a Western orchestra. All-original compositions draw upon five millennia of culture and legends.

“I’m really just amazed by the quality of not only the orchestration, the scores and everything,” said Mr. Richling, “All the performers, you can just tell they’re really top-notch musicians. I think they’re matching the sensitivity of the [Shen Yun dancers]. It’s a very well put together show — seamless.”

Mr. Richling added, “I think it’s something that a lot of people should come see.”