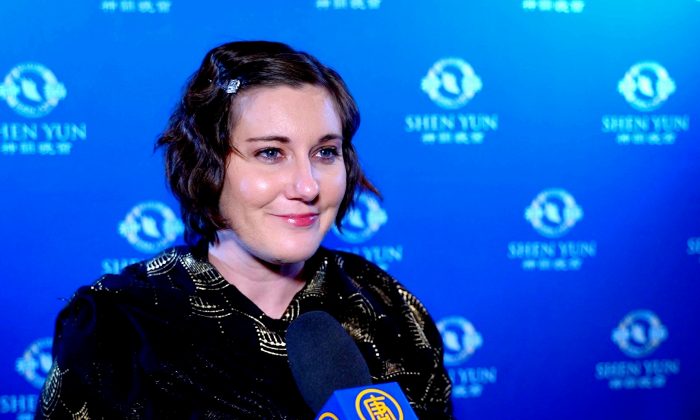 DETROIT—Kim Williams had seen Shen Yun a few years ago, and when she saw it again on March 9, she remembered all the music and the feelings she felt the first time.

“I loved the performance. … It was really wonderful,” she said.

Kim Williams plays flute and piccolo for the US Army Reserve Band. She is also a vocalist. She attended Shen Yun Performing Arts Global Company’s evening performance at the Detroit Opera House.

“Seeing all of these different cultural elements come together is just something that you rarely see now. It’s just such a comprehensive program that makes it unlike any other,” Ms. Williams said of the performance.

Ms. Williams felt the description was no exaggeration.

“I loved the show because it binds all if the arts of China and you really get a sense of the culture and the history that’s behind it both the language, the dance, the music, and the warm feelings that come though,” she said.

Since its inception in 2006, the New York-based Shen Yun has embarked on its mission to revive traditional Chinese culture through classical Chinese  dance. A Shen Yun program features nearly 20 story-based dances that retell stories from China’s rich 5,000 year history, from ancient times to the present day.

Ms. Williams had a lot of different feelings throughout the performance.

“There were funnier dances that told more of stories. There were dances that told about ancient lore. So, more of like a history and a deep understanding. There were the dances that talked about the hardships that they’re facing in China right now with persecution and that drew me near to tears. So, there was the full gamut of being happy, to sad, and everywhere in between,” she explained.

Shen Yun’s orchestra is unique in that it has a blend of Chinese and Western instrumentation. Being a professional musician, this really stood out for Ms. Williams.

“You could hear the different Chinese instruments. … There was a combination of both in the melody and the harmonies and the instruments as well,” she said.

The professional flautist said the music throughout the performance went hand-in-hand with the dance and worked very well together.

The performance left her wanting to go out and learn more about traditional Chinese culture, and even help in the effort of allowing the traditions to thrive.

The traditional values and culture Ms. Williams said she saw in the performance were something she felt was incredibly important. She added that in Shen Yun, there is a lesson about the past.

“It teaches us who we are, and learning about different cultures teaches us about how we can live together and how we can bring about a better world,” she said.