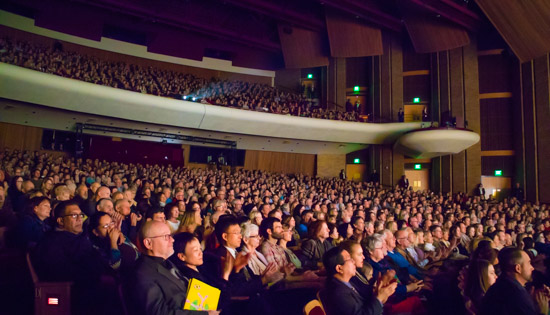 At Boise's Morrison Center For The Performing Arts on Jan. 20, 2016. (Alex ma/Epoch Times)

BOISE, Idaho—Seeing Shen Yun Performing Arts was the only thing Kassie Cerami wanted for her birthday. She had seen the seconds-long television spot of brightly colored costumes and gravity-defying leaps, and “kept saying that I wanted to go, I wanted to go,” she said.

So her husband bought the tickets, and Ms. Cerami brought her mother to the performance as well. By the end of the performance she was determined to be back next year, and buy tickets for her daughter in Utah as well. They attended the Jan. 20 performance at the Morrison Center for the Performing Arts. It was the second night of New York-based Shen Yun’s first Boise, Idaho, run in its 10 years, and Ms. Cerami loved every minute of it.

“It’s life-changing, and I loved it,” said Ms. Cerami, a democratic campaign manager who led President Barack Obama’s 2008 campaign in Idaho. “It’s like watching art unfolding in front of you. It’s like educating through art. I loved it, it was mesmerizing.”

Ms. Cerami came to Shen Yun to have fun, and said she found she was learning through the performance as well.

One incredible thing was the music, she said. Like many audience members, Ms. Cerami found peace in the music of Shen Yun.

She learned that the ancient Chinese used music to heal. The emcees explained that the pentatonic scale of Chinese music was connected to the five internal organs of health and the five senses.

“I just thought that was incredible, so I found myself closing my eyes and listening to the music, and I realized the healing property it had,” Ms. Cerami said.

“It was so peaceful, and I felt healing. I felt tranquil. I felt I was taken to another place—I forgot where I was. I just listened, took it all in. I loved it.”