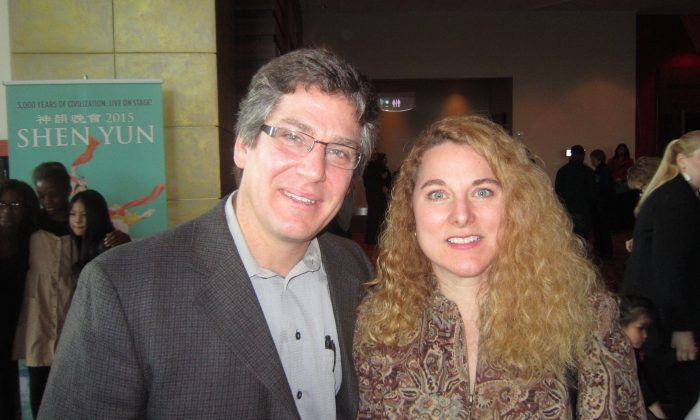 ATLANTA—A curious professor wanted to learn more about Chinese culture after a Shen Yun Performing Arts ad intrigued her. “That’s partially why I wanted to come [to see Shen Yun] because I realized how little I do know. …. I’d seen the ads speaking about 5,000 years of civilization, the struggles, and I just wanted to come see it,” said Dr. Anne Dunlop, assistant professor of preventive medicine and director of the residency program at Emory University.

“I grew up in the United States,” Dr. Anne Dunlop explained. “We don’t learn a lot about Eastern culture in our school system, so I think it’s important to learn.”

Attending the performance with Anne at Cobb Energy Performing Arts Centre on Jan. 4 was her husband, Dr. Boadie Dunlop, the director of the Mood and Anxiety Disorders Program at Emory.

“Obviously, we don’t get a lot of exposure to Chinese culture, its ethnic dance forms,” he said.

“I just like hearing about the folk culture and hearing the folk music as well,” Dr. Anne Dunlop said.

Dr. Boadie Dunlop felt the orchestra’s unusual mixing of both Eastern and Western instruments worked well. “You wouldn’t think they didn’t develop together because it came together so smoothly. It seem like they were made to go together,” he said. “It’s a very nice blending.”

In addition to the full orchestra, Shen Yun tours with award-winning instrumentalists and vocalists.

Dr. Anne Dunlop was particularly captivated by the erhu, a two-stringed Chinese instrument. “It was beautiful,” she said. She had never heard it before. “Nor have I ever really heard of women sing like that. I loved it.”

Enchanted with the music, both were impressed by the visual beauty of the many costumes, which were changed for every dance.

“Especially the rise of the phoenix … turquoise phoenix,” Dr. Boadie Dunlop said, referring to the dance Phoenixes of the Sapphire Paradise in which dancers are dressed as fairies “in azure skirts and fluttering capes,” according to the program notes.

“And the plum blossoms,” added Dr. Anne Dunlop, speaking of the dancers spinning pink handkerchiefs, “symbols of plum blossoms and the coming arrival of spring.”

Two of the dances raised the Dunlops’ curiosity about an ongoing persecution in China.

“You hear about the Falun Gong, and it makes us wonder a little bit more of the details of exactly what it is that the Chinese government is so opposed to,” Dr. Boadie Dunlop said.

Both had heard about the more than 14 years of oppression of people who practice Truthfulness, Compassion and Tolerance, but Dr. Boadie Dunlop had never been clear why the regime would attack this group.

“It’s something we should know more about, I feel,” Dr. Anne Dunlop said.

Looking at the whole show, Dr. Boadie Dunlop said: “I think there’s a broad appeal. If you look at the crowd, it’s incredibly diverse in age, background, people’s origin. It’s tremendously broad in its appeal. Lots of different folks want to come see it.”