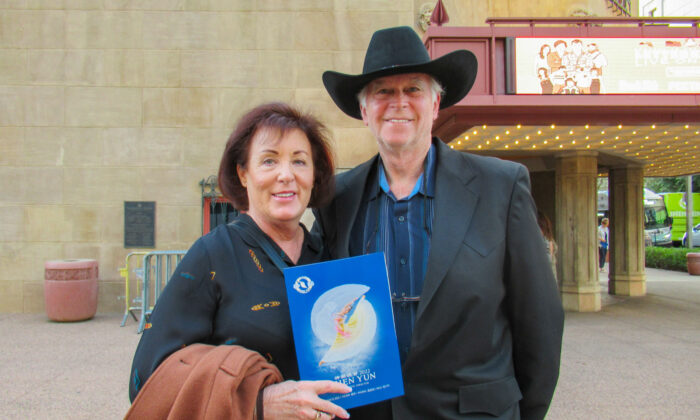 PHOENIX, Ariz.—A performance that can move one to tears is a powerful experience.

Pam Segall, a retired court reporter, spoke through tears after attending Shen Yun Performing Arts at the Orpheum Theatre on March 2, saying she felt deeply moved and inspired by the experience.

“It was just absolutely beautiful and moving, it really was,” Ms. Segall said. “The music was outstanding; the dancing was amazing. It just gave you such a deep feeling—it was magnificent.”

Shen Yun is known for raising awareness of the story of the Chinese regime’s persecution of Falun Gong practitioners, a group of peaceful people who follow the principles of Truthfulness, Compassion, and Tolerance in their lives. Ms. Segall expressed that she chose to come to see Shen Yun “because of Falun Gong and their mission, what they’re trying to do, and that they’ve been oppressed by China.”

David Segall, a campaign manager who came to see Shen Yun with his wife, added, “It shows there is hope. The CCP is oppressing everybody. Their goal is world domination. And seeing something as beautiful as this put into an art form was hopeful.”

Hope is something that many audience members leave with after seeing Shen Yun. The company strives to present pure beauty and stories of righteous courage, showcasing stories where good prevails over evil.

“If someone were to ask me what it’s about, I would say that it’s about hope, and it’s about the grace and the beauty of the Chinese culture,” Mr. Segall said.

Matthew Hacking, the lead software engineer for Wells Fargo was also in the Phoenix audience with his family. He was struck by Shen Yun’s presentation of “China before communism.”

“This year, I read [the advertisement] a little closer, and it talked about ‘China before communism,’ and that interested me when it said that,” Mr. Hacking said.

He appreciated Shen Yun depicting the spiritual beliefs of China after observing that religion isn’t something people talk about these days.

“I really like the spiritual aspect, talking about supreme being, and I appreciate that part. Especially because nowadays, it seems like in many places of entertainment or education, everybody’s afraid to talk about that today. So I love that.”

“It’s beautiful. It just made me think a lot about how rich [Chinese culture is] …. especially, some of the things I learned today about the moves that look like gymnastics, but they existed many centuries before gymnastics,” Mr. Hacking said. “That was cool.”