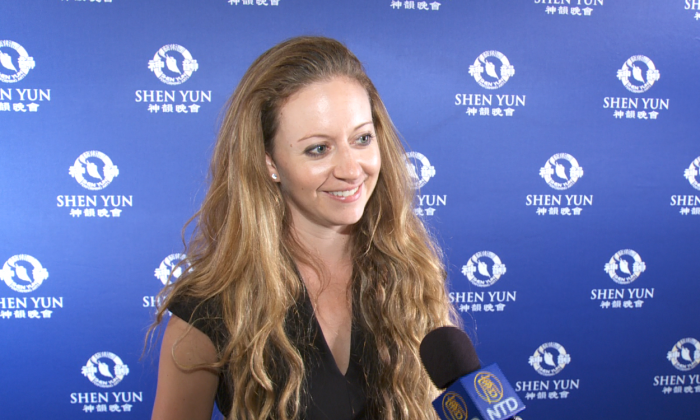 MELBOURNE, Australia—Former ballerina Chantel Roulston was impressed by the stories told by Shen Yun Performing Arts and described the performance she saw as “artistically beautiful.”

Roulston, who watched the New-York based Shen Yun Performing Arts company perform at the Regent Theatre on Feb. 9, has played lead roles in “Swan Lake” and the “Nutcracker.”

She understands the amount of work needed for these dancers to reach a high skill level.

“They are obviously very athletic but they’ve got some beautiful artistry as well,” she said.

During her 15-year career as a dancer, Roulston worked with performing arts companies such as the Hong Kong Ballet and English National Ballet; she has also performed for the Queen at Buckingham Palace, and danced at the closing ceremony for the 2012 London Olympic Games.

For Houlston, a feeling of nostalgia was felt as she watched the performance.

“Wonderful to see these artistic roles again [as] I don’t get to see many shows anymore,” she said.

“It’s really beautiful to see this and I used to perform in China a lot.”

New York-based Shen Yun Performing Arts showcases traditional Chinese culture—a culture that has been lost under the communist regime. Shen Yun’s mission is to revive this 5,000-year-old culture and share its stories with the world.

Along with stories from ancient history, there are contemporary stories that depict persecution in modern China by the communist regime; this was an eye-opener for Houlston.

“The prison scene was quite interesting. A little shocking, which I didn’t think would be in this show tonight, but eye-opening.

“But it is quite nice to see the honesty in it.”

Houlston was impressed by how well the digital backdrop blended with the dancers to create a complete story.

“That has been quite eye-opening and really beautifully done; like with scenes where it’s gone from Earth to Heaven or to an outer sphere and back again,” she said.

She hopes that more people can see Shen Yun and appreciate the rich traditional Chinese culture.

“It’s an artistically beautiful show, describing the best elements of China,” she said.