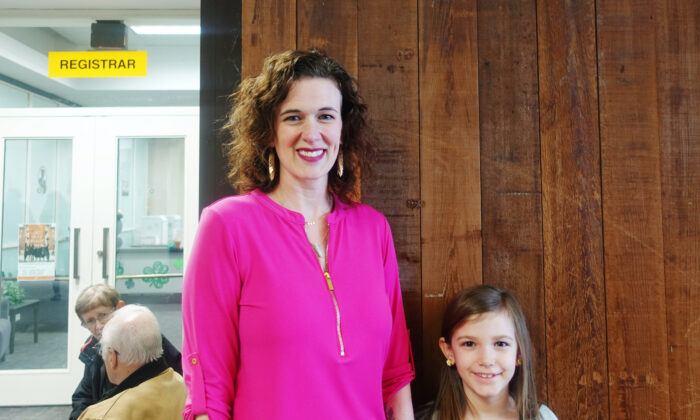 UNIVERSITY PARK, Ill.—Dance instructor Megan Marko absolutely loved Shen Yun Performing Arts when she and her daughter saw the dance company on March 8, 2020, at the Center for Performing Arts at Governors State University.

Megan Marko is a member of the dance faculty at Main Street Dance in Peotone, Illinois. She attended Shen Yun Performing Arts’ matinee performance with daughter McKenna, who is 7 years old and is already studying dance herself.

“We absolutely loved it,” Marko said. “It was a stunning performance that we’ve seem to take for granted because we compartmentalize so many different art forms, and they were able to seamlessly put them all together in one performance.”

“I like the show very much,” her daughter said. She later mentioned, “I’m sweating from my back,” and explained she felt it was because the beaming energy from the performance was so powerful.

The dance instructor also mentioned that she had studied music at Olivette University, and appreciated being able to hear the live orchestra, unique in that it features Eastern and Western instrumentation, “to be able to appreciate the combination of the instruments seamlessly, so well blended.”

A Shen Yun program consists of 20 or so vignettes that through story-based dance, retell classic Chinese myths and legends, as well as notable events from China’s rich 5,000 history from ancient times to the present day.

Besides the many pieces within the program that feature dancing and orchestral music, Shen Yun also features solo instrumentalists and vocalists. Referring to the bel canto soprano, Marko said, “to be able to have that opera as well in another language, but just the beauty of it that we seem to really take for granted.”

The spirituality of the culture was another facet she appreciated seeing. “Just to have an open expression is freeing,” she said.

“I do believe our world could definitely benefit from the way the message was portrayed, because not only did it portray stories and the movement and the music, but they also gave very good descriptions for our younger audiences to be able to understand what is being put on stage,” she said.

“The bright colors, the vivid energy, everything that they had was well put together,” she said.