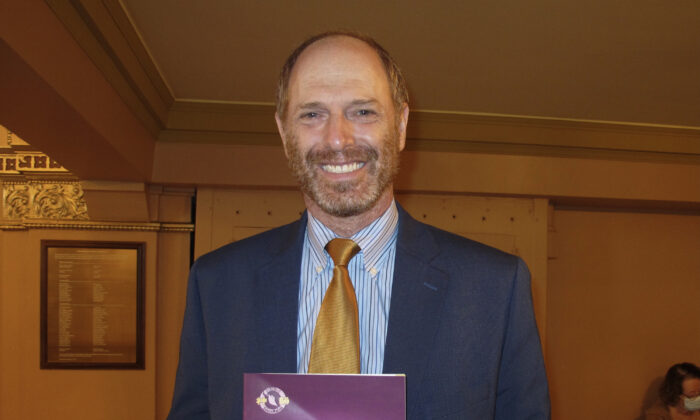 CHICAGO, Illinois—The Chicago Marathon had the city tied up on Oct. 10. But for Shen Yun fans, that was not the chief event of the day.

Andrew Bransky, vice president of investments at Stifel Financial Corp., made sure he didn’t miss a minute of Shen Yun Performing Arts at the Auditorium Theatre.

“I love the show. I thought it’s incredible,” he said. “The performers are amazing. It was mind-boggling.”

Based in New York, Shen Yun is unique in that, in addition to presenting classical Chinese dance and music, much of the performance draws from China’s rich spiritual heritage of 5,000 years. Up until the communist takeover, Taoism, Buddhism, and Confucianism formed the basis of Chinese life.

I like the fact that they’re telling people to reject atheism and to connect with the real sense to the divine, and treat people well.
— Andrew Bransky

“I like the fact that they’re telling people to reject atheism and to connect with the real sense to the divine, and treat people well,” Bransky said. “And there’s a message of beauty and humility and love. I really thought that was an amazing, amazing message. This is something that everybody should see.”

“As they say, having faith in the Creator really can make a person a better person, a stronger person, and it connects you with the divine,” he continued.

Linda Hernandez, a manager at the National Association of Realtors, was exuberant upon seeing Shen Yun after spending the last two years in the pandemic anticipating the performance.

What impressed Hernandez most was the choreography. “I mean, they’re spot on,” she said. “It’s heart-stopping to see how beautiful that they make dance such an art. It’s absolutely beautiful.”

Shen Yun’s dance pieces, with their colorful costumes, are further enhanced by an animated digital backdrop with which the dancers interact—the effect is to transport the audience to different times and locations in China’s long history.

“I think the Chinese culture is amazing. It’s amazing to learn more and more,” Hernandez said.

Hernandez said she couldn’t wait to tell her friends how much she enjoyed the experience. “I actually have a very good friend that I work with who is Vietnamese, and she goes, ‘Linda, you are absolutely gonna love it.’ You know what, I can’t wait to go back and tell her how amazing it was.”

Visual artist Jessica Grose loved the “colors and the movement and flow” of the performance.

“The color of each outfit is so well thought out and so well put together … it’s so deep, what I’m feeling,” she said.

“I was moved to tears, with the colors and also the digital pieces! I wasn’t expecting that!”