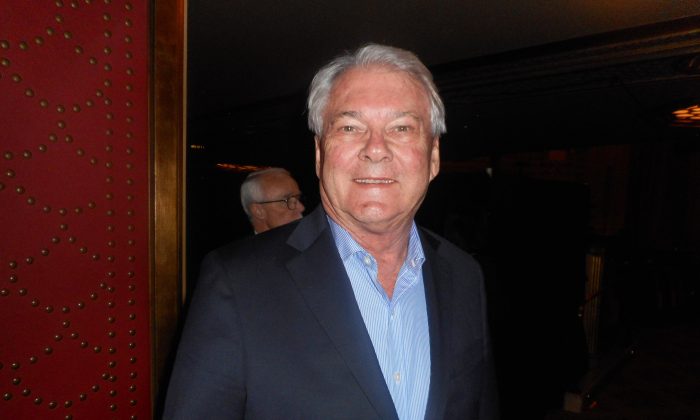 Andereck attended the performance of classical Chinese dance and music with a friend at the San Francisco War Memorial Opera House. He admired the traditional culture and beauty that he saw in Shen Yun.

“It’s beautiful. The artists are so talented, and the music is excellent. The colors are beautiful. And the culture, the history of China, is just so amazing,” he said.

Shen Yun, which is based in New York, travels the world every year with the goal of bringing China’s authentic traditional culture to life for audiences. So far this season, it has visited the northern California cities of Berkeley and San Jose before heading to San Francisco.

The need to restore China’s traditional culture came about because today’s Chinese communist regime has spent the last several decades systematically destroying the culture. Because the regime does not want to allow a revival of tradition, Shen Yun cannot perform in China today. However, it has performed in top venues in other countries around the world.

“I understand what’s happening today in China, and I know that [several] thousand years of history cannot be erased. And to keep it alive is just a blessing,” said Andereck.

The dancers perform classical Chinese dances, ethnic and folk dances from China’s different regions and dynasties, and stories told through dance. Accompanying them is a live orchestra, which Andereck admired.

“That [orchestra] is so powerful. The music is excellent. Excellent!” he said.

Shen Yun uses a state-of-the-art digital backdrop to transport the audience to ancient China, modern China, or scenes from myths and legends.

“I love that,” Andereck said of the backdrop. “I love the coordination. I love the color. It’s just amazing.”

David Batista, COO of a software company, also enjoyed the performance on Dec. 31. He said Shen Yun enhanced his impression of Chinese culture.

“I’ve always had great admiration for [Chinese culture], and I think this just really takes it to another level. So I find it really beautiful, fascinating, and … artistic; and athletic as well.”

Batista, who is married to a Chinese woman, loves the fact that Shen Yun is trying to restore traditional culture.

“Anyone that has an appreciation for culture and art would really enjoy this. … There was a lot of sincerity in their dance. So it wasn’t like they were going through the motions; it’s like they were truly invested in what they were doing,” he said.

Classical Chinese dance is an independent dance system with a history of thousands of years. According to Shen Yun’s website, it “combines explosive athleticism with flowing elegance, and is one of the most expressive art forms in the world.” The dancers perform difficult jumps, spins, and tumbling techniques.

Batista admired the beauty and grace of the performance, and he called the dancers’ skills “phenomenal, just phenomenal.”

“I think [what impressed me the most was] the grace of all the dancers and artists in the production—very graceful, very athletic, enormous stamina, and artistic,” he said. “I feel the energy of the [dancers].”

Patrice Gautier, a software engineer, experienced Shen Yun with his family on the same night. He particularly enjoyed the music of Shen Yun.

“It’s great dancing and music. I love the music,” he said. “I like the blend of the Eastern and Western instruments.”

The two-stringed erhu especially stood out for Gautier. Held vertically and played with a bow, the erhu is often called the Chinese violin and has a history of over 4,000 years. It is capable of expressing a wide range of emotions.

Gautier said he would say to the dancers, “Keep doing what you’re doing.”

With reporting by Gary Wang, Mary Mann, and Sally Appert.