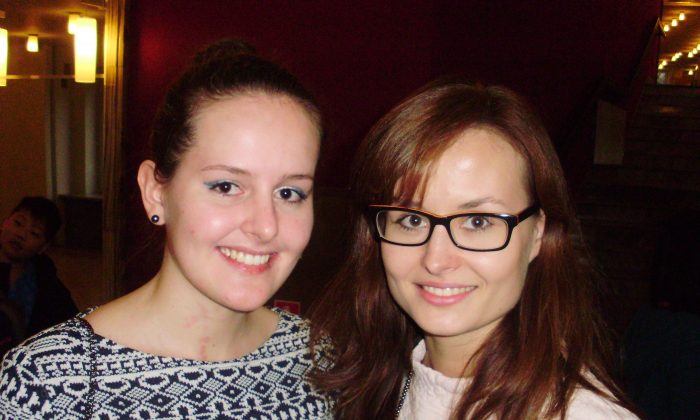 Diana (R) and Kamila Wyroslak at the Shen Yun Performance at the Grand Theater in Lodz on March 8, 2015. (Peter Sanftman/Epoch Times)

LODZ, Poland—Shen Yun Performing Arts returned to the historic city of Lodz to once again dazzle the Poles with stunning performances of classical Chinese dance and music with all new 2015 programming.

Shen Yun staged two performances at the Grand Theater in Lodz, the first on Saturday March 7 followed by a second on Sunday.

Sisters Diana and Kamila Wyroslak, who watched Shen Yun on Sunday, could hardly wait for next year so they can see Shen Yun again.

“It was amazing, it was just unforgettable, the colors, music … every detail was just perfect,” said the older sister, Diana, a medical doctor.

“You can see that every single movement was [representing] a feeling, and the stories in all dances were amazing and sometimes very touching,” added Kamila, who is following her sister’s footsteps to become a doctor.

The two sisters were encouraged to see Shen Yun by their parents who saw the performance opening night.

Based in New York, Shen Yun has a mission to revive China’s divinely inspired culture brought to the brink of extinction under communist rule. Shen Yun cannot perform in China today.

Shen Yun has classical Chinese dance at its heart but also incorporates ethnic and folk dance as well as mini-dramas with story lines from ancient China all the way to the present.

Diana did not know about the oppression in today’s China.
“I didn’t really know that in China you cannot talk about certain things,” she said. “For me that was sad.”

Kamilia said, “It is really sad that for example [Shen Yun] cannot be shown in the China, because I think that every person should see it and feel the same emotions that we are feeling now.”

Diana felt the performance had a profound spiritual aspect, and portrayed important values.

“Even when they were very, very sad, they gave everyone hope, to stay optimistic.”

Diana was referring to the dance The Power of Compassion depicting the persecution of practitioners of Falun Dafa, a peaceful meditation practice, in today’s China. When the policeman hurt the practitioners they responded with compassion.

Marzena Bomanowska, director of the Film Museum in Lodz, saw Shen Yun on opening night. She said she found the performance to be very special.

“The dancers are really talented, and the whole show was special. Costumes, moves, music, everything was really perfect,” she said.

Ms. Bomanowska said she really enjoyed seeing the different ethnic and folk dances from different parts of China and appreciated having exposure to that side of the Chinese culture.

She also said the spiritual aspect of the performance was something that everyone could relate to.

“I thought it was really good,” said Ms. Tran, a make-up artist.

She particularly enjoyed seeing some of the traditional Chinese legends in the performance, with values such as wisdom and good versus evil.

“I really liked the spiritual message of the show. It was really good overall, I really enjoyed, it and would recommend it,” said Ms. Tran. “The message of forgiving others.”

Mr. Zamal, a real estate agent, said he also appreciated the spirituality of the performance.

“The references to spirituality and about loving everyone regardless of their belief, that was really powerful,” he said.

“It is definitely very warm and beautiful.”