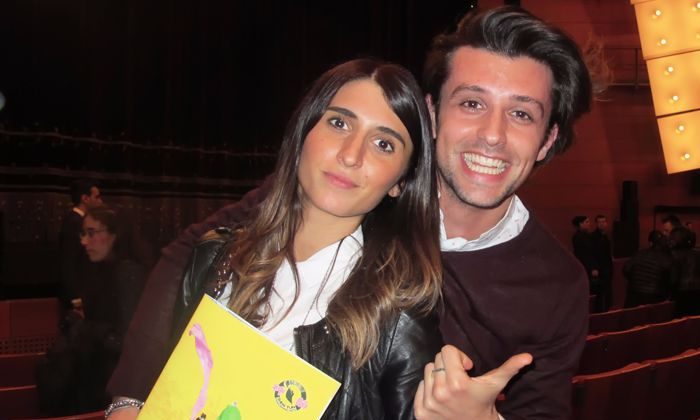 Dancer Fabio Rossi and his companion Hellen at the Shen Yun performance at the Teatro deli Arcimboldi in Milan on March 30, 2016. (Mary Man/Epoch Times)

Fabio Rossi, a dancer himself, was amazed by the skill and performance of the Shen Yun dancers, remarking how seamlessly they performed the challenging flips and turns in classical Chinese dance.

“It seems almost natural what they do…it is beautiful,” Mr. Rossi said after watching the performance on March 30.

The dancers, Mr. Rossi continued, seem as though are “walking on their heels, and have wheels under their toes.”

“When we run, you can tell we’re running, but even when they’re walking it seems as though they’re dancing. It makes a difference, it’s beautiful.”

Classical Chinese dance, as explained by Shen Yun’s website, is an ancient art form. It is known for its incredible flips and spins, and its gentle elegance, and is one of the most rigorous and expressive art forms in the world.

Shen Yun’s aim in presenting its superb performances around the world is to revive China’s divinely inspired culture.

“Certainly, their devotion to their art is visible. It seems that it’s their focus that enables them to do these [movements]. I don’t know if it’s about their concentration, a divine message, or just their hard work,” he said, noting that he feels lighter after having watched the performance.

Shen Yun is ‘The Explosion of the Spirit’

There was much for Aristide Cabassi, a president of a charity, to read into while watching Shen Yun Performing Arts. The performance was a combination of many artistic forms—music both vocal and symphonic, dance, color and design, scenic technology in the digital backdrops. And for Mr. Cabassi, every art form spoke to him.

“Music is the universal language and it’s always a message. The color is a message, the dynamic of the body is a message—the explosion of the spirit. This brings everyone together,” Mr. Cabassi said, at the Teatro degli Arcimboldi in Milan.

In a word, the experience for Mr. Cabassi was profound.

As the president of the Foundation Onlus Isacchi Samaja, his work is in goodwill, providing healthcare, and awarding grants and scholarships to scholars of the arts.

The performance was full of such goodwill: classical Chinese dance, an orchestra blending East and West, and masterful staging are used in Shen Yun’s mission to revive 5,000 years of authentic traditional Chinese culture. This culture was once nearly lost and is still oppressed in China today, but that did not diminish the power of Shen Yun’s message on stage.

I think this is the most beautiful thing we can offer, especially to the younger generations.
— Aristide Cabassi

“I think this is a great message of hope for humanity,” Mr. Cabassi said. “I think this is the most beautiful thing we can offer, especially to the younger generations.”

On one level it was artistic excellence, “a performance of a great vigor, made with excellent choreography, fantastic music and colors; and the animated background was very important.”

It was done such that it “makes us savor the music, the color, the profoundness of the spirit, by means of dancing.”

And, of course, the purpose of art is to inspire deeper reflection: “The taste of the art of music, which is the portrayal of beauty—apart from the color, the humanity and the symphony are the things that can seep into one’s soul and also change our heart and our mind a bit, as we’re burdened by the distressing things of life.”

Thus, “it’s a good thing to watch this kind of thing, in order to feel a bit revived.”

The ancient Chinese had a similar understanding, striving to compose music that was in harmony with Heaven and Earth. Such elegant and virtuous music was said to possess a pure energy.

This understanding is something one can come to no matter your cultural or religious background, according to Mr. Cabassi. That becomes unimportant in the face of understanding art and beauty.

“The important thing is that people start to think of beauty as a manifestation of the divine. That enters your heart and expresses itself with human solidarity, friendship, brotherhood. It’s a strong message to the modern society too,” he said.