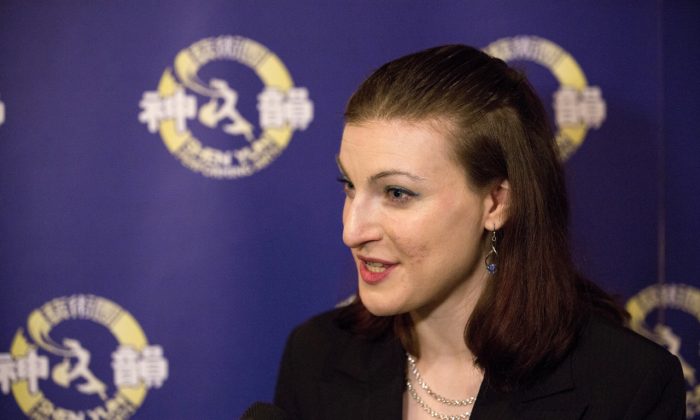 Former dancer Susan Nault was impressed with the dancing in the Shen Yun Performing Arts show she attended at the National Arts Centre on Jan. 2. 2015. (Evan Ning/Epoch Times)
Company

OTTAWA, Canada—Former dancer Susan Nault was blown away by the calibre of the dancing in the Shen Yun Performing Arts opening show at Ottawa’s National Arts Centre on Friday night.

“It was phenomenal. All of the performers have great stage presence. Their technique was impeccable.
I could barely tell when they landed their jumps, and that’s a very important thing … to not hear the landing over the music. It’s a very big thing and it’s something you really have to work on as a performer,” she said.

According to the Shen Yun website, classical Chinese dance has its own set of training methods in basic skills and has strict training in both physical expression and specific postures. It also involves learning combinations of leaps, turns, flips, spins, and other aerial and tumbling techniques.

It is a vast and independent system of dance, and the Shen Yun dancers have it down to a fine art.

“They were just amazing, every single one of them,” said Ms. Nault. “Understanding the history of China and the performance aspect there, I know those moves and some of those are very hard. There was a gentleman who did a needle [dance movement] in between the dance. That is not an easy thing to do, it really isn’t.”

She was also impressed by the lighting, the costuming, and the digital backdrops, which are animated for the story-based dances.

“I loved the transition between the [backdrop] and the dance itself. It was just a fantastic performance,” she said.

“I really loved the dance with the napkins,” she continued, referring to “Handkerchief Blossoms,” a folk dance from northeastern China.

“I was trying to understand how that worked, and then I could see the ring,” Ms. Nault said.

That was when she thought to herself, “‘aha, that’s how it worked.’ But it took some effort,” she noted.