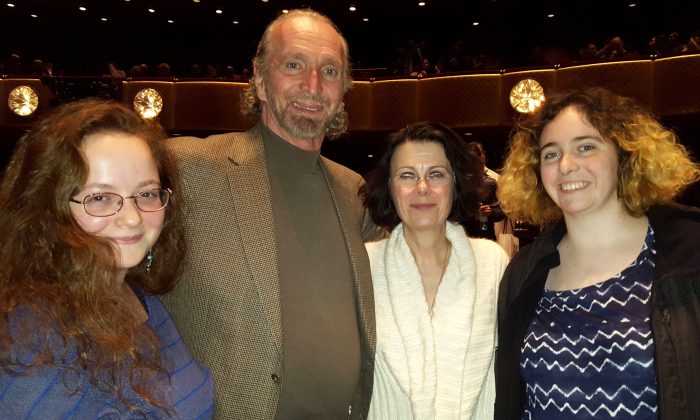 NEW YORK—The Renners have an affinity for Chinese culture, having visited several cities, delved into the ancient history, and shared customs and stories with the Chinese.

But seeing the traditional Chinese culture come to life on stage through Shen Yun Performing Arts was not like anything they had experienced before.

“[It’s] eye-opening! It definitely opens your eyes to all of the culture that you’d never get to see before. And I’m making parallels to things today that you think is unique or whatever, but it’s really embedded in the years of culture and performance that the Chinese have had for thousands of years. It’s amazing,” said Mrs. Maureen Keegan-Renner, who is the head of project management at a pharmaceutical company.

She and her husband Paul, an attorney, and two daughters, Noa and Melanie, attended the matinee performance at Lincoln Center on March 6.

Mrs. Keegan-Renner, who studied dance and exercise physiology for her Master’s, said she was speechless at the perfection the dancers had attained.

Most of the performances by New York-based Shen Yun are classical Chinese dances, an athletic and expressive form that had developed over thousands of years—soaking up wisdom from every dynasty, as Shen Yun puts it.

The expressiveness of the form is what lends it to accomplish such storytelling—with tales like Emperor Kangxi’s ascension to the throne or a vignette about the Monkey King this year. And Mrs. Keegan-Renner said this shows just how old the concept of story-telling through dance is.

“It’s almost like it speaks to you,” she said, even through the use of the costumes, “like a language.”

Mr. Renner said he has been meditating all his life, and sitting there in the David H. Koch Theater, he felt as if his body was relaxed to a meditative state.

“It really brought me to that place, where I drop my physiology and my whole body relaxes and there’s just serenity,” he said. “The color and the music were very moving.”

He had always been interested in Chinese culture, and all that stems from it like the arts, beliefs, the philosophies and ideas like reincarnation and meditation.

Traditional Chinese culture is said to be divinely inspired, from the Mandate of Heaven that granted emperors their right to rule, to the attire worn by the people. Society was built on principles that came from the religions of Buddhism, Confucianism, and Taoism, as Shen Yun’s website explains.

Mr. Renner felt it was a “very old and very ancient and very revered” culture that personally “resonates on a very deep level.”

“You could see the spirituality and how it has the spirit in the expression of the dances and the stories,” Mr. Renner said.

This culture was so much in the art and dance, he said. “There’re so many deep movements; they’re so subtle, but they’re so meaningful.”