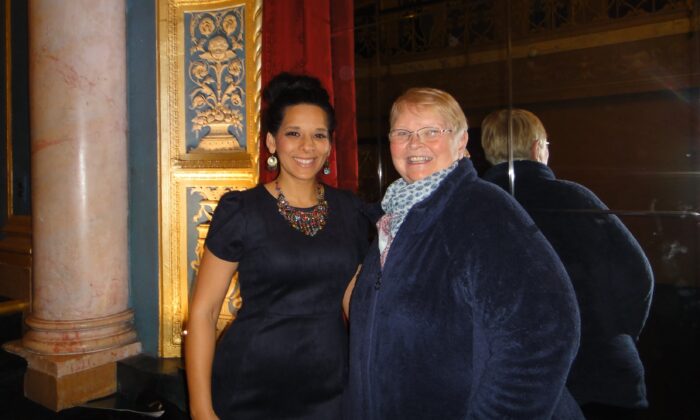 DETROIT—Lia Moore discovered the beauty of dance movements when she was 8 years old visiting Epcot Center. Ever since, she’s been attracted to Asian culture and has wanted to spend all her time in China and Japan.

Having studied Chinese opera in college, and now being a professional dancer in the styles of Hawaiian, Hula, Tahitian, and Maori, she feels this has given her a  good understanding of how theater works in terms of the Asian culture in general.

The New York-based Shen Yun is a music and dance company that endeavors to revitalize traditional Chinese culture through classical Chinese dance.

As a dancer herself, one of the things she noticed in Shen Yun was some of the unique characteristics between the male and female dancers.

“I thought they were beautiful,” Moore said of the female dancers, adding that they were very graceful and very entertaining to watch. “Just the grace you have on stage and being able to command a stage at the same time is amazing,” she said.

Moore said thought the male dances were awesome. “In American culture, you don’t see that at all. You don’t see men who have that sort of power and grace at the same time,” she pointed out. “And you could definitely see that the men had power and grace. Definitely something we lack, that balance, that yin and yang, that Asian influence and power.”

As Shen Yun’s website explains, “Chinese dance is at the heart of what Shen Yun does. Known for its incredible flips and spins, and its gentle elegance, it is one of the most rigorous and expressive art forms in the world.”

“All Asian cultures, their dances, the way they do theater is very expressive,” Moore explained. “Everything is expressed through dance … and they did an amazing job doing that.”

Based on her experience, Moore mentioned how the incorporation of elements into a dance, whether it be a costume element, or a prop element is a challenging aspect of putting together a program. Many dances incorporated interesting props or costumes that flowed and moved as if they were props.

“It’s very challenging, and they did it with grace. It’s beautiful,” she said.

She felt that the choreography was amazing. “The choreographers definitely kept you on your toes, especially when you were figuring out what was coming next … [it] was visually very appealing, very stimulating,” the dancer explained.

For its backdrops, Shen Yun utilizes digital projection which depicts various scenes from heavenly realms, to imperial courts, to rural landscapes. Not only are they visually stunning but they are also animated and interact with the performers.

“The timing and the precision and the execution of that was nearly flawless,” Moore said of the dancers’ interaction with the digital backdrops. “It really was a lot of fun to have that interactive aspect. Again, it’s not something that’s being done on a high scale right now, so it’s very unique to this environment.”

If she were able to say anything to the dancers, first of all, she’d say “Happy New Year!” and she would tell them how much she appreciated their message. “There was a message that was coming through, there was definitely a message about what’s happening to their own people that was definitely portrayed throughout it but not overly done. So I thought it was powerfully portrayed, but yet still subtle in a way … amazing job. Thank you for being here, for showing up, for being present and just giving your absolute best,” she said.