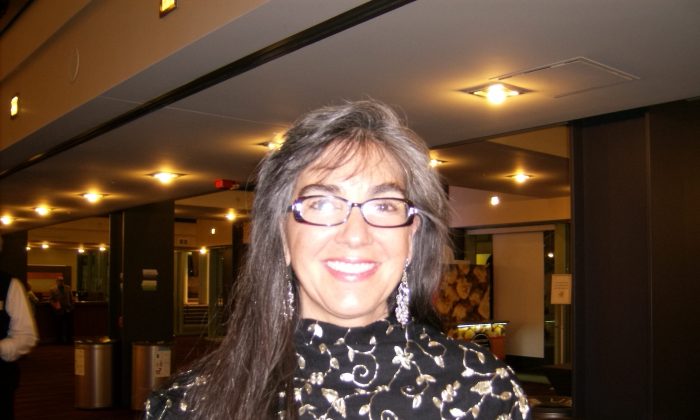 Janan Jennifer Platt was brimming with inspiration from seeing the beauty of Shen Yun Performing Arts, on March 4, 2016, in Denver. (Li Yu/Epoch Times)

“I was expecting it to be beautiful, but I was still surprised [by the beauty],” Ms. Platt said at The Buell Theatre on March 4, listing an array of adjectives to describe the sort of beauty she saw.

There was an elegance to it that made it exquisite, and a delicacy through it all, and a hidden strength. The dancers were all so strong, but they were still delicate and made it look so easy, explained the painter/writer/poet.

“I think it’s just like seeing a tree in bloom,” Ms. Platt said. “You see the blossoms of the tree, and how powerful they are. They give fruit and life continues, but they are very delicate, and that’s the way I felt about the dancers, that they were giving fruit, and they were giving sustenance to us.”

The New York-based dancers performed mainly classical Chinese dance, an art form tempered over thousands of years. As Shen Yun explains, and Ms. Platt observed, it is a physically demanding dance form, including many aerial and tumbling techniques like mid-air splits and no-hand flips in quick succession.

It is also a form known for its elegance and expressiveness, and Shen Yun uses it to tell many stories.

There were peaceful, gentle scenes, like a a flowery pavilion in the Sui Dynasty, as well as dramatic stories full of tension, like young Emperor Kangxi defeating a power hungry general after his throne.

Ms. Platt could feel the heaviness, the sadness, and the peacefulness and grace thoroughly. It reminded her that humans have been struggling for such a long time, and that there must be a way for us all to become more kind to one another. She saw humor and strength, and what China must once had been. She saw good versus evil play out, in beauty.

“The dancers are just phenomenal,” she said. “It’s very visually beautiful, the movement, the dance is so exquisite. I would say it’s a peaceful feeling. So beautiful.”