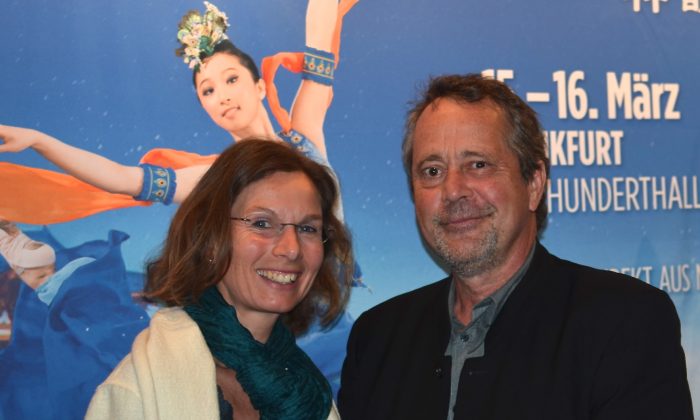 The Fromme’s were given the tickets to the Shen Yun performance because they are frequent visitors to Asian countries.

Mr. Fromme said, “Although I don’t have a musical ear, I was pleasantly surprised listening to the music that combined Chinese and Western instruments. This was quite impressive and the melodies were very pleasant to my ears.”

According to the Shen Yun website, “The Shen Yun Orchestra combines the spirit, beauty, and distinctiveness of Chinese music with the precision, power, and grandeur of the Western symphony orchestra. The result—two great traditions producing one refreshing sound.

He continued, “The orchestra was fantastic. However, I was especially impressed when listening to the erhu, the instrument with the two strings.”

There was so much that impressed him, including the choreography, the costumes, and the synchronization by the dancers.

“One could see and feel that a lot of training and effort went into this show. Every dancer was in harmony with the group. It was very well synchronized. Actually if I hadn’t seen this with my own eyes, I would have believed that any one group could perform in such unison.”

According to the Shen Yun website, “Animated backdrops transport the audience to another world. Projected behind the dancers, the hi-tech images lift the stage and set it amidst blossoming landscapes, deep forests, Mongolian prairies, or celestial paradises.”

For Mr. Fromme, “the backdrop was very impressive. I could see landscapes that I have seen on Chinese wall hangings. It felt so familiar.”

“I saw humor on stage, something I didn’t expect of a Chinese person. It was fantastic and very funny at times. It was unique and unforgettable.

Ms. Fromme chimed in that she “found the performance to be wonderful. I saw softness and grace in the dancers, as well as femininity. The femininity was present throughout the performance and it was pleasant to see.”

“It was great to see and feel the professionalism the artists presented throughout the show. Everything was just perfection, unison, and harmony.”

Just like her husband, she will tell others about the show and hopes that they will not miss the next day’s performance.

Reporting by Epoch Times German Staff and Heide B. Malhotra