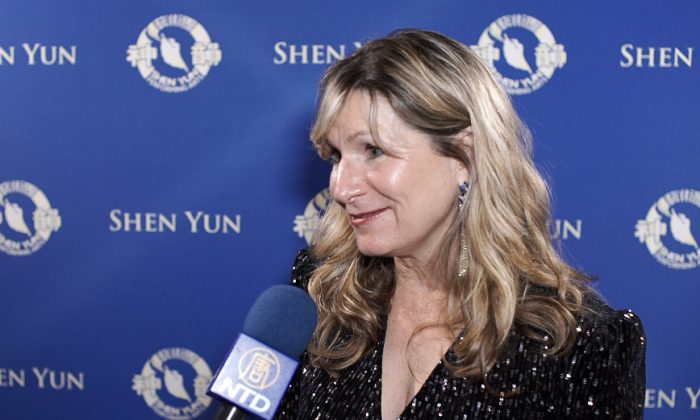 SAN FRANCISCO—Shannan Dugan, a criminal defense attorney, was amazed and touched when she saw Shen Yun Performing Arts for the first time.

“It’s absolutely beautiful,” she said. “We are stunned by the beauty and the dancing. It’s wonderful.”

She experienced Shen Yun at the War Memorial Opera House in San Francisco on Jan. 6. Shen Yun is a New York-based performing arts company that travels the world with productions of classical Chinese dance and music.

Classical Chinese dance is an expressive and athletic art form thousands of years old. Shen Yun’s website explains that while many of the postures in classical Chinese dance may look simple, they require the coordination of every part of the body, even the fingers and the gaze. Through these movements, the dancers can express a wide range of emotions.

Shen Yun’s mission is to bring traditional Chinese culture to life onstage, and some of the dance pieces tell stories of ancient and modern China.

“I love the stories,” said Dugan. “I love how they give us the background to the stories, and I love learning about the culture of China through the dancing. … I was very moved by the dance with the mother and the daughter who goes to prison. The persecution, I learned about that. That was very moving.”

She was referring to the dance piece “Goodness in the Face of Evil,” which is about a persecution taking place in modern China. The meditation discipline Falun Dafa, which is based on truthfulness, compassion, and tolerance, became very popular in China in the 1990s. However, the Chinese communist regime feared its popularity and began to persecute its practitioners in 1999.

The regime has also tried to wipe out moral values such as faith and respect for heaven, which were an important part of traditional Chinese culture. Shen Yun therefore includes ancient values and virtues in its performances, aiming to keep this ancient heritage alive.

“I can feel that faith and the spirituality coming through, and then the way they move just makes that even stronger,” said Dugan.

“It’s very deep. It’s not just dancing; it’s working on a deep level,” she said. “I think they really convey the divine through the dancing and through the emotions and through their faces, and it’s very beautiful. It adds a very rich layer to it, and it’s really moving.”