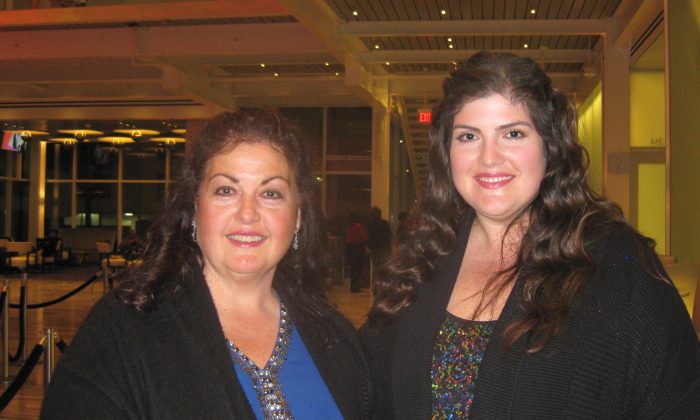 Eva Valenzuela (L) and her daughter, Monica Carter, attended the Shen Yun performance at the Dr. Phillips Center for the Performing Arts, in Orlando, on Feb. 10, 2016. (Ai Lan/Epoch Times)

ORLANDO, Fla.—Precision is a key element in classical Chinese dance. Through strict training in physical expression and graceful postures, the Shen Yun Performing Arts dancers glide across the stage in unison.

Each dance piece is performed in brilliantly colored traditional Chinese attire from historical dynasties and accompanied by the harmonious sound of an orchestra where an East meets West.

“It was absolutely magnificent,” said Ms. Carter, a real estate agent, who attended the Feb. 10 Orlando performance with her mother, Eva Valenzuela, a nurse.

Ms. Carter remarked on how well all the dancers stayed in sync with each other: “All of the dances, the choreography, everything—it was incredible. It was just breathtaking. It was gorgeous. One of the best things I’ve ever seen.”

“They were so light on their feet, it was just gorgeous,” Ms. Carter said.

It looked like they flew in the air.
— Eva Valenzuela

“It looked like they flew in the air,” Ms. Valenzuela said.

Ms. Carter marveled at the dancers’ ability to tumble without making a sound when their feet hit the stage floor. The technical skill required in classical Chinese dance emanates from a thousands-year-old traditional aesthetic art form passed down and perfected from dynasty to dynasty.

Shen Yun’s dancers have mastered signature flips and tumbles that are part of the very foundation of this divinely inspired dance technique. Dancers flip themselves into the air while completing a series of turning movements.

Ms. Carter and Ms. Valenzuela thought the dancing, combined with the choreography and music, was breathtaking and beautiful. “There was no flaw in anything,” Ms. Valenzuela said.

Most of the dance pieces depict mythical stories from China’s rich 5,000-year culture, which is believed to have been divinely inspired. Theatregoers appreciate the show’s themes of good prevailing over evil and veneration for the divine.

Some of the dance pieces tell the story of modern-day China, where the Chinese regime has a history of destroying traditional culture and oppressing those who practice the spiritual discipline Falun Gong.

Ms. Carter did not realize that the oppression going on in China was so severe. She appreciated the final performance, which showed that there is still hope for China and for humanity.

Her mother, who is Cuban-born, said it was sad that Falun Gong could not be freely practiced in China and that the traditional culture has been a lost there. But Ms. Valenzuela is well-aware of how communism oppresses people, and said she was hopeful that China would come back to its earlier, beautiful state.

She recalled that when the curtain fell, her daughter said, “The truth will prevail.”