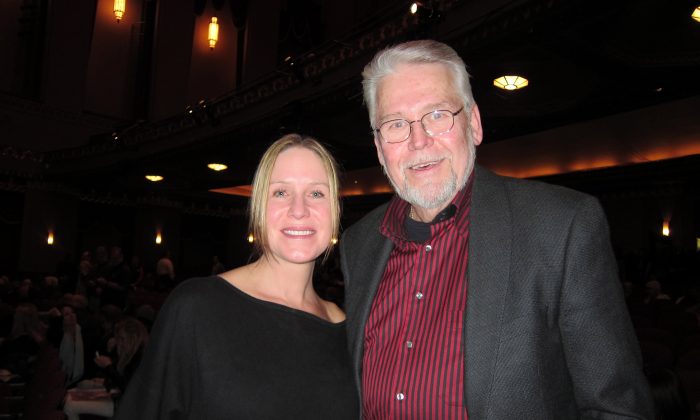 “The whole music brings calm over you, and also the whole history of the Chinese people,” he said.

“It makes me feel good to see that Chinese culture is still keeping their tradition,” he said.

Shen Yun, based in New York, travels the globe reviving the divinely-inspired culture, after it was nearly decimated by the ruling communist regime.

“Through the universal language of  music and dance, Shen Yun weaves a wondrous tapestry of heavenly realms, ancient legends, and modern heroic tales, taking you on a journey through 5,000 years of Chinese culture,” the company’s website states. “Its stunning beauty and tremendous energy leave audiences uplifted and inspired.”

Mr. von Dressler’s daughter Michelle accompanied him to the performance.

“I love everything about it,” she said. “The music is fantastic, and they [the dancers] just float. I mean it’s amazing. You don’t hear footsteps.”

The dancers are at such a high level that they glide, and “are beautiful angels,” she added.

Classical Chinese dance is the base of a Shen Yun performance—it is one of the oldest, and versatile, dance forms in existence.

“China’s deep cultural traditions are contained in classical Chinese dance, allowing its movements to be richly expressive, such that the personalities and feelings of characters can be portrayed with unparalleled clarity,” states Shen Yun’s website. “It is therefore capable of depicting scenes from any time period, whether ancient or modern, Eastern or Western, in a strikingly vivid way.”

Mr. von Dressler encourages others to experience Shen Yun, “to have an overall experience of traditional China.”